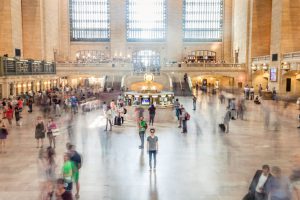 Are you lucky enough to be hopping the rails at the classical and majestic Grand Central Station in New York City? Not only is there plenty to admire just within the station itself – maybe you have some leisure time before catching your train. There is plenty to discover nearby just by taking a little stroll!

Here are some of the exciting ways to kill time inside and outside of Grand Central, the grandest of all railway stations!

Things to Do Near Grand Central Terminal

Or rather, outside. Grand Central is a monument to the old New York. Popular opinion is it needs remodeling, but rather it needs preserving.

If you have just a few minutes, take a walk around the building and admire the architecture. The sculptures surrounding the clock at the main entrance depict Hercules, Mercury and Minerva, representing strength, speed and wisdom. The lifelike eagle statues perched on the corners help keep the pigeons away.

Inside, you can wait out your train in the Biltmore Kissing Room. It is so named for being the room where exhausted passengers were often reunited with their loved ones after long journeys. If you’re lucky enough, maybe you’ll get a kiss too!

FUN FACT! Don’t forget to look up! You’ll see the ceiling hole where a redstone missile was placed at the height of the cold war as a display against soviet strength. Lots of other historical tidbits can be found throughout the terminal.

And if it all looks very familiar, that’s because the main concourse has been featured in films from classic Hitchcock all the way to the Marvel movies of today!

Eating On The Go

You might only have time for just a quick bite. Luckily at Grand Central, you’ve got some of the classiest options ever found in a train station.

If you have the luxury to escape the terminal, try getting some fresh air in a nearby park or exploring history with local landmarks. Here are a choice few:

Speaking again of famous filming locations, is your idea of a landmark the real place some of your favorite scenes were filmed? Then Grand Central Concourse is just the beginning!

After flying your way to the news building, head up to the corner of 52nd and Lexington to the “7 Year Itch Grate” where the legendary photo of Marilyn Monroe’s windy day was taken and recreate your own magic. Now that’s an instagrammable moment!

A little farther away near the East River you can walk along the river by the Queensboro bridge, where Woody Allen and Diane Keaton took their romantic stroll in “Annie Hall”.

If you want to spend your time taking in some cultures, try these interesting museums to waste an hour or two.

Morgan Library is named for oil magnate J.P. Morgan and includes collections you might not find in a regular library or museum, including the millionaires own archives.

Like I said, you don’t have to leave Grand Central to have a full new york tourist experience. The terminal even has its own museum. Fittingly, it’s the New York Transit Museum, which explores the history of transportation in one of the most overpopulated cities in the world!

And for a goofy excursion, try the Museum of the Dog, presented by American Kennel Club. That’s right, a museum for our furry four-legged best friends, where you can spend a little time appreciating canines without all the messy pickup.

Finally, there’s always time for shopping, right? You should make it a store or two that you may not find in Any Mall, USA. Try Fifth Avenue. Iconic and expensive, Fifth Avenue might seem intimidating. But you don’t have to be a millionaire to go window shopping at some of the most famous stores in the world!

If you had the time to wander about, you’ve probably built up an appetite. But you look at your watch and you only have time for a quick drink! It better be perfect. Find the Perfect Pint at the appropriately named The Perfect Pint East. It’s just a stone’s throw from Grand Central. But don’t throw any stones in crowded New York, you’re likely to hit somebody.

If you like live music with your meal, catch a bite and a tune at Fine and Rare, which describes the food, the music and the atmosphere at this lovely establishment.