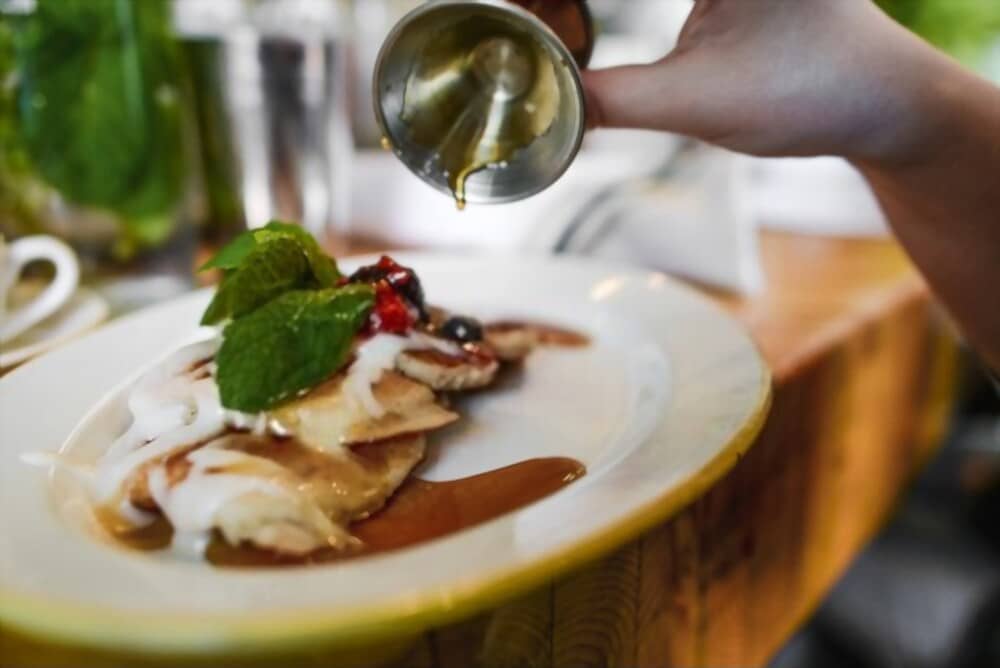 Did you know that pancakes might be one of the oldest foods in human existence, dating back to prehistoric times, according to archaeological evidence? Boy, have pancakes come a long way baby!

All around the world, cultures have their own version of a pancake. And if you want to explore the wide world of pancakes all in one place, what better place than New York City? Where people from all over the world live, eat and flip pancakes.

People call pancakes lots of things – hotcakes, flapjacks or griddle cakes – but one thing they all agree on is that they’re scrumptious, a word you may hear more than once in this article on where to find the best pancakes in nyc. Pancakes come in all shapes and sizes, no matter how you flip ‘em!

Here is a list of all the different pancake flavors you can find in New York City!

New York has five boroughs, which means an almost unending selection of sumptuous is available to you, just a short metro ride away. So let’s start with the best traditional pancakes in each borough:

Nestled in the heart of Chelsea, they serve breakfast starting from a bright and early 7:30am until 1130 am, with a hot cup of joe included. It doesn’t come any greasier than their short order cooks in paper hats!

Like water in the desert, The Mirage Diner appears along the Kings Highway! It’s a classic Greek Diner where the possibilities are endless, the kind of diners which are slowly going out of style in the big city.

A post shared by All diners of New York City (@dinersofnyc)

The Mirage offers classic, simple pancake platters and classic tunes on their old school tableside jukeboxes, completing the retro kitsch vibe that is as tasty as the hotcakes.

The best traditional pancakes are hidden on a menu in the heavily immigrant section of Queens known as Astoria. Why hidden? Because they are buried under a selection of crazy pancakes such as the Bedrock, a flintstones themed fruity pebbles topped treat, on the brunch menu.

The place is called Mom’s Kitchen and their specialty is comfort food and nothing comes to mind more than pancakes when people think of comfort food. The traditional pancakes are a bargain at Mom’s price of just six dollars and can be paired with other traditional breakfast items.

Even the name Riverdale Diner evokes memories of Archie and the Gang and other classic American traditions. Here you can enjoy famous Silver Dollar pancakes, left over from when silver dollars were a thing. Riverdale’s classic traditional pancakes are made from buttermilk and can be ordered with fresh fruit or preserves, or just plain old yummy syrup!

The decor of J’s On The Bay in Rosebank on Staten Island takes you back to a time of simpler things, like the happy days of fifties diners. Thus, fill out the feeling with a short stack, silver dollars, or just plain old pancakes. Melt some butter on top and douse them in maple syrup and you will be instantly transported to a super tasty time period!

Pancakes For All Types And Tastes

Yum Yum! If you’re not full already, dive into these eclectic selections of the most amazing pancakes, some you might have imagined and many you couldn’t even dream of but will have to try now that you know they exist!

Check out the brunch menu at Good Enough To Eat, a gourmet comfort food spot on the Upper West Side in Manhattan. Their pancakes are the kind a magical Grandma might whip up.

Serving delicious brunch since 1981, selections range from the Peter Pan, complete with a coconut trim, to their eponymously named Good Enough To Eat Pancakes, served with apple raisin compote and sour cream. Or just slap some of their creamy strawberry butter on any of their scrumptious offerings.

Two great places await if you want to turn what is traditionally a breakfast into dessert!

First up is Bubby’s in Tribeca, a place which conjures up sweet dreams of fluffiness by name alone! Another spin on comfort food, Bubby’s has two locations in Manhattan where you can sample guiltily pleasurable dessert pancakes smattered with nutella, or topped with caramelized bananas and toasted walnuts, or – get this – a fried chicken and bourbon maple syrup pancake! What? ‘Nuff said!

It’s a tough choice and here’s another one: The aptly named Sugar Factory. Their pancakes are so crazy there is literally a multi-colored double stack selection called the Insane Rainbow Pancakes, served with gummy bears. Yes, gummy bears. They have two locations in New York and multiple locations throughout the nation.

New York was originally called New Amsterdam and the Dutch are proprietors of the best reputation amongst European pancakes. So why not a taste of old Amsterdam in New Amsterdam?

Well, a place called Prune literally has a dish called the Dutch pancake. It’s oven baked with pears and served with maple syrup and has been called one of the fluffiest pancakes ever to pop over onto your plate. Top it off with the bacon that comes alongside and douse it in maple syrup.

Want to get a little more exotic than boring old Dutch pancakes? Get Ukranian at Veselka’s!

This East Village traditional Ukranian joint offers buckwheat or buttermilk pancakes made from scratch and served all day long! In raspberry, blueberry, banana or chocolate varieties. You can get a side of breakfast bacon egg and cheese pierogies to go with it, too! Sounds like a little weird combination, sure, but you said you wanted exotic.

You can also try Moroccan pancakes at Mimi’s Hummus in the Ditmas Park area of Brooklyn. They are made with semolina flour and served with honey butter and strawberries.

Norma’s is a joint where the pancakes can’t get any fancier, but somehow they seem to keep turning out fresh ideas. What makes Norma’s remarkable is that pancakes come in sweet and savory varieties.

Norma’s welcomes those who are too shy for brunch but want to have breakfast for lunch, serving late. Sweet Tooth? Try banana and macadamia nuts. Savory Tooth? Warm brie and ham await your taste buds. Fuu Fuu Food was never so much fun!

French pancakes are called Crepes and they are, like the French, a little different from the rest of the world. They are thinner and crispier than your average pancake. If you want an authentic one, best to find a creperie.

Like Norma’s, most French creperies offer sweet and savory options. The most authentic French hole in the wall atmosphere is found at the simply named CreperieNYC, which even includes vegetarian options. It is located at 135 Ludlow St in downtown Manhattan. Recommended selections include white chocolate and raspberry in the sweet category or a savory sauteed chicken crepe with mushrooms, swiss cheese and pesto.

The dining in is small, so get your crepe to go and walk around the nostalgically classical streets of the neighborhood for a true “crepe in Paris” feeling. There is a second location nearby in the East Village.

Ricotta pancakes are very popular in New York City, especially the lemon ricotta style. There are a couple notable hot spots to get a yummy ricotta pancake.

The popular Italian soul food joint Maialino mixes the gooey ricotta in extravagant measures right into the batter, giving it a custardy texture, though the pancakes come served crispy.

Locanda Verde serves their ricotta pancakes with a thick lemon curd and blueberries.

The most ridiculous pancakes, ones even the most starved, most pancake-lovin’ individual couldn’t dream up, are at Jacob’s Pickles on the Upper West Side. They serve down home southern fried style comfort food, which of course includes good ol’ flapjack hotcakes! Order the fried chicken and pancakes combo and smother it all in maple syrup like it was good gravy!

If you’re in Brooklyn when the griddle cake cravings assault your tummy, stop by Tom’s Restaurant. They offer an eclectic mix which includes another lemon ricotta variation, on the menu as the Danish pancake. More offerings include sweet potato and a delightful cinnamon roll flavor.

Or return to another borough and hit up Staten Island Diner, especially if you partied a little too hard the night before. They have hangover pancakes on the menu, made with apple crumbs and bacon bits baked in! They also have mouth watering options like Oreo, cheesecake, carrot cake and peanut butter and jelly pancakes. Matches made in heaven.

Pancakes for Health and Wealth

Admittedly, many of these pancakes are potential gastronomical catastrophes. But pancakes can be healthy too! Here are some options for the healthy and socially conscious pancake addict.

Creamline is a simple, no-frills organic restaurant found in Chelsea Market by the waterfront. Pleasant atmosphere and even more pleasant ingredients.

The ingredients are from locally sourced farms and somehow manage to be crispy and fluffy at the same time! The pancakes are made with farmer ground flour and the maple syrup comes from the nearby Catskills mountains in upstate New York. Served with fresh bananas, blueberries or chocolate chips.

You might have heard about the keto diet. It’s no carbs and no sugar. So you would think that would mean no pancakes, too, right? Wrong!

At Hu Kitchen in Union Square you can start your day with Jordy’s Banana Chocolate Chip Pancakes, which are made with almond milk, organic egg and organic coconut, plus raw honey. You can also pick up keto friendly ingredients to take home with you.

To top it off like whipped cream and a cherry with a simple and traditional pancake, the consensus seems to be that the best one is at Chez La Tante, a popular spot in the Greenpoint neighborhood of Brooklyn.

For the best extravagant pancake in New York City, the most popular choice is Sunday in Brooklyn, especially for the fluff and fluffier malted pancakes, which come covered in gooey awesomeness, formally known as hazelnut maple praline sauce.

That about covers it like a pancake covered in maple syrup. Hungry yet?