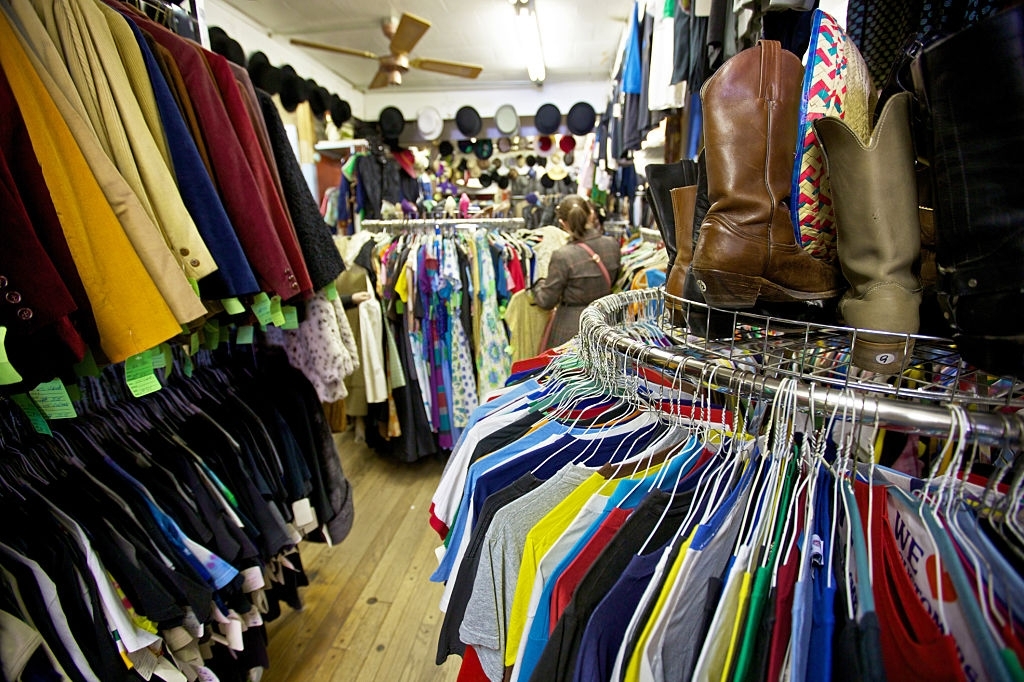 Want to come back home from your big holiday in New York City looking like a brand new you, without spending brand new clothes money? Or perhaps you live in New York City, therefore committing a large part of your budget to rent not fashion? What you need is a real NYC thrift store.

You won’t find real thrift stores in any of the many tourist destinations and zones in New York City. Those places are still charging extra to cover their primo location, location, location! And they have a reputation to maintain.

So don’t be fooled! New Yorkers know this and now so can you. Here is a list of where to go to find the best nyc thrift stores.

An appropriate place to start. Many high-end fashion houses purchase their threads here in the fashion market and old duds are plentiful too.

At Crossroads, the apparel sells out fast, but you can replenish the racks with your own gear since they buy, sell and trade. Originally a California -based company, they have two locations in NYC, including one in the Flatiron District.

At Vintage Thrift, you can find reasonably priced designer gear and your purchases benefit the Jewish Council, which preserves Lower East Side history. Plus, grab accessories like shoes and handbags to make the whole ensemble!

Next up, the neighborhood where thrift transformed into fashion. The punk and new wave styles of the seventies and eighties would be adapted by high couture in the nineties, and jeans that used to cost $5 suddenly cost $500. But you can still find places to pay old prices. Well, a little more than just a fiver, but…

The owner of Thriftique Au H20 boutique hails from Milwaukee and has an eye for 80s and 90s fashion. This is a beloved, hip and hot place to find stylish bargains that keeps the East Village traditions alive! You don’t even have to step inside since they usually have a carefully curated bargain rack out front.

Next up, uptown! Harlem stretches across from the East to the West Side and is becoming the next go-to hip neighborhood, so naturally the Harlem fashion is transforming and thrift stores are full of funky gear.

You can find fashion from all over the city at The Sharing Place. They have boxes placed all over the boroughs for donation, even from as far away as magical Astoria, a neighborhood that will be covered a little later.

The Emergency Mobile Thrift Shop is an on-the-go thrift shop housed inside a renovated ambulance. It grew out of a Bronx woman’s success as a seller on ebay. You can shop online and the clothes come to you at affordable prices! The ambulance can often be found at flea markets or rented for private events.

Brooklyn is the most hip and artistic of the five boroughs, plus it’s sprawling, so naturally Brooklyn is home to the trendiest thrift stores outside of the island. Let’s just say Brooklyn knows how to fit in!

Monk is one of the most popular thrift stores, frequented by hipsters and wannabe hipsters. This store prides itself on it’s “curated collection” of thrifty threads.

Besides the nameful boasting, Ten Foot Single By Stella Dallas is a more modest spot to dig around for some style at a secondhand sum. In the large front room you will find the bargains, but a back room of secret stashes ups the ante if you’re willing to drop a few extra coins.

What makes Indigo Style so very unique is that it’s interactive. How, you ask? Like a fashion doctor, they make house calls. They will come to your closet and advise you on purging and bingeing your wardrobe. You can even rent clothes from them!

Next, The Bronx, the hippest hood north of Harlem. A Borough, to be exact. Another zone that is becoming more popular and gentrified, thanks to attractive rents. The Bronx is heir to Brooklyn’s hipster population.

Thriftland USA calls itself a “charity shop”. That moniker extends many ways. Charity to you with low prices for great outfits, charity accepting donations and charity donations to sympathetic causes. Shopping at Thriftland USA is a good deed that does everybody good.

Don’t overlook the well known charity organization that never goes out of style. The Salvation Army has thrived on thrift for decades to support its cause. You can find numerous Salvation Army locations in The Bronx and all over New York City where you know your fashionable donation is getting well-spent.

And now, Queens! Queens is a borough made up of little neighborhoods, much like Brooklyn, each with a flavor and thrift store all their own. Here is just a sample.

In Sunnyside, try Sunnyside Thrift. Make an afternoon of it, because here patience is a virtue that will be rewarded if you are willing to spend the time to find a gem. The best part of this place is everything seems underpriced.

In Long Island City, curiously a neighborhood not found on Long Island, is Hour Children. Not just a cute play on words, Hour Children actually benefits children.  Appropriately, you can find childrens wear at a very reasonable price here.

Our last cheap couture de Queens is found in the aforementioned Astoria neighborhood, on Steinway Street, an iconic block where the famous Steinway Pianos have been manufactured for over a century. The name is easy to remember: It’s Steinway Thrift Shop. And up the street, another easy to remember named store that rhymes, Unique Boutique! Unique Boutique stocks secondhand mall brands like L.L. Bean.

Finally, the most overlooked of the boroughs. Staten Island has a spot worth ferrying to – Everything Goes, where everything must go for rock bottom prices. What’s unique and cool here is that they carry second hand Halloween costumes. And Halloween is a holiday no one grows out of!

Now that we’ve checked out the real thrift stores, let’s look at some fakers. Because maybe since you’ve been so thrifty, you have a few extra dollars left to splurge at what’s more commonly known as a “vintage” store. A New Yorker knows if you see that word, it means it may be second hand, but it won’t be cheap!

Tokio7 is in the East Village and here you will find second hand “designer” versions of the East Village Style. Be prepared to plunk down a pretty pricey penny for the steals here. You’ll recognize the entrance by the big Predator movie statue. They carry high-end designers from Chanel to local talent. They also boast a consignment policy.

Metropolis Vintage is where the celebrities shop for rock star caliber vintage gear. Their inventory is often filled to the brim with fashions from the seventies through the turn of the millennium, with a focus on music and band t-shirts. And the staff themselves provide great taste in music for your shopping soundtrack.

Screaming Mimis comes close to being one of the places you were warned about at the top of this article, the tourist trap. It’s located in Union Square which is not so much a tourist area, but is a transportation hub point for downtown. It’s worth a little hassle because Screaming Mimis is a frequent provider of costumes for film and tv production. You never know who might have worn your find, just like in the famous “Jon Voight” episode of the quintessential NYC series, “Seinfeld”.

Where do the au courant hipsters who set so many modern fashion trends get their wardrobes? Where are their fashion churches, the thrift shops they swear by? Brooklyn, of course!

The appropriately named L Train Vintage chain is usually just a hop, skip and a jump from many L train stations. Choices are endless, making it hard to choose what to wear out of the store. You won’t want to wait to get home to start showing off the goods. They have more than one location, which is good because it can get crowded at peak hours. Try their sister store, No Relation Vintage, too.

The Attic Brooklyn is a true hoodie thrift shop that prides itself on its authenticity. One reason the hipster community supports The Attic is their commitment to sustainability and making the past modern. And they are more reasonably priced than most.

Not Quite Consignment Stores

Perhaps you want to make a trade? Without having to wait for someone to buy your clothes to cash in like in a consignment shop, pop into one of these popular and appreciated buy/sell/trade outlets.

Beacon’s Closet has a solidly Brooklyn vibe, but lucky for you it has multiple locations. The biggest is in hipster heaven Williamsburg, but you can also visit their closet in Chelsea, among other places. They offer a higher than most percentage for your old styles. And It’s easy to navigate, since their racks are color-coded.

Buffalo Exchange is probably the most famous chain of thrifty stores. There’s even locations in the fashion capital of the world, Paris. They trade directly with customers throughout their five borough-wide locations. At the exchange you’ll find a mix of casual and high-end items.

Places That Have Other Stuff

Thrift stores are all about old stuff. That means more than just clothes. Many of the places listed are not strictly clothing shops. They also sell accessories, household items and even furniture. And if you look even harder, you’ll find the unexpected.

The Cure Thrift Shop has clothes down in the basement, but far more intriguing is the ground floor, where old vintage knick-knacks like typewriters and sewing machines

sit waiting for a new home. So what is this shop the cure for, exactly? Diabetes, the cause your hard-earned money is put towards. Every so often look out for the bag sale, where you can take all the gear you can stuff into a bag that will set you back just $15 buckaroos.

Finally, of course Goodwill, that stalwart of home furnishings for the young and starving. Shopping at Goodwill creates good will for many, at any one of the scattered locations found across the boroughs. They have clothes, kitchenware, electronics and other things conventionally necessary for every home at very fair prices.

Ending on a high note, the most fun of all the thrift stores in New York is Mother Of Junk in Brooklyn, because amongst all the fascinating junk, they have a collection of vinyl records. You never know what musical gem you might come across in their bins!

By now, you must have gotten so much stuff you might have to donate some of it back! Happy bargain hunting!