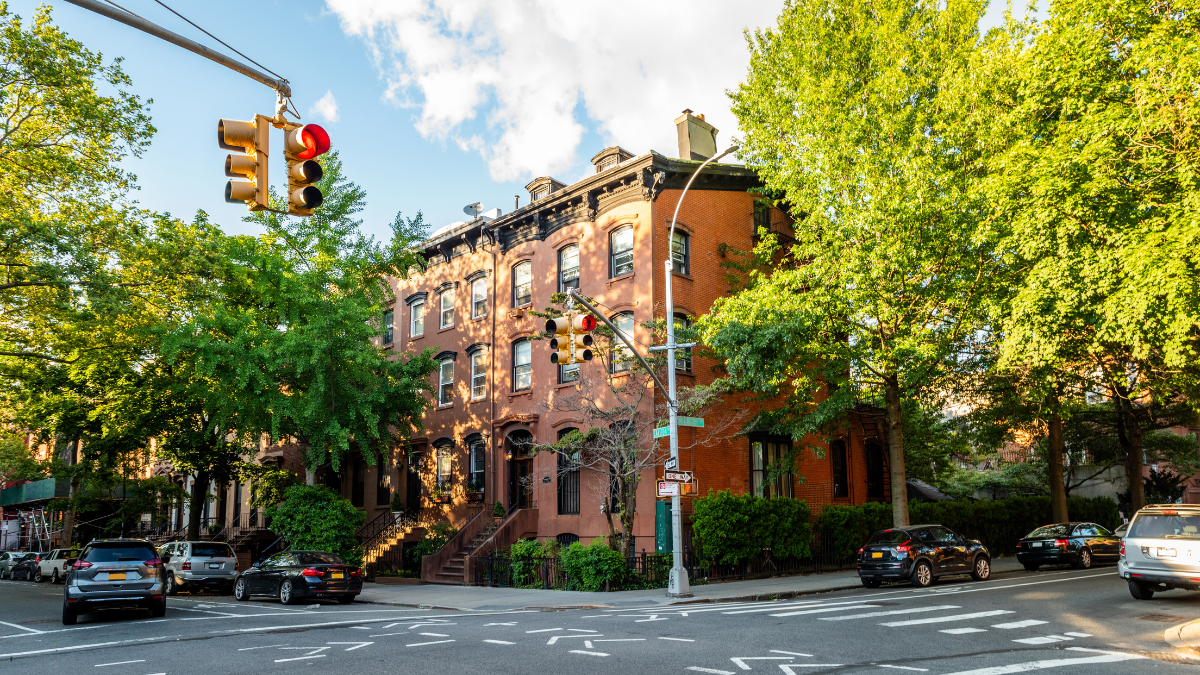 Brooklyn, to be exact. Brooklyn is one of five boroughs that make up New York City. The others are Manhattan, Queens, Staten Island and The Bronx. Two of those boroughs are islands. Guess which ones!

Brooklyn is a very diverse place, yet it has a questionable reputation for safety. That’s only for certain other neighborhoods. Others are affluent. Still, others are young professionals and creatives.

Contents hide
1 A Hill Fit For A President: Brooklyn Bound
2 Beyond Borders
3 Making Sense Of The Census
4 So What’s It Gonna Cost Me?
5 Top Of The Ranks
6 Okay, Now How Do I Get There?
7 But What Is There To Do?
7.1 Attractions Of Clinton Hill
8 Great! So Is Clinton Hill Safe?
9 What Do Residents Have To Say?

A Hill Fit For A President: Brooklyn Bound

Clinton Hill neighborhood is located in Brooklyn. Brooklyn is the most populous of the five boroughs of New York City. It has a population of close to two and a half million.

Some of the more famous Brookl include Park Slope, an affluent section. Bensonhurst most known for hip-hop culture, and Williamsburg, renowned for its young creative vibe.

Clinton Hill is located in a part of Brooklyn known as Kings County. Brooklyn shares Kings County with another borough, Queens. Kings County is the second most densely populated county in all of the United States.

Clinton Hill is a highly gentrified section of Brooklyn with A+ ratings from many organizations in different categories. Why not explore Clinton Hill a little?

Clinton Hill is bordered by a wide range of other Brooklyn neighborhoods and landmarks. On the North, Brooklyn Navy Yard and the Brooklyn-Queens Expressway. On the South and Southwest, Atlantic Avenue and Prospect Heights.

To the Northeast, Williamsburg. To the East, Classon Avenue and the aforementioned Bedford-Stuyvesant. Finally, to the West, Vanderbilt Avenue and Fort Greene. Clinton Hill is situated in the North central part of Brooklyn.

Making Sense Of The Census

Clinton Hill has a relatively small population. Just over thirty four thousand in the most recent census data available. This is within an area of just over a half a square mile. The density ratio works out to seventy four inhabitants per acre.

The population breaks down into forty percent African American, thirty five percent white, thirteen percent Latino or Hispanic and the rest a mixed bag of Asians, Pacific Islanders and Native American, among other and mixed races.

More than two thirds of respondents in recent polls rate the neighborhood ‘diverse’ while seventeen percent rate Clinton Hill ‘family-oriented’. About twenty percent of residents are young families with children.

Gender diversity is pretty evenly split. The largest percentage of the population falls in the eighteen to fifty four demo. More than half!

Most residents possess a bachelor’s degree, while nearly a third possess a master’s degree or higher. Both those statistics are higher than the US national average. In addition another nearly twenty percent possess at least some sort of associates degree.

A well-educated neighborhood, indeed. The majority of respondents in recent polls said the most helpful tip to a newbie is to respect the local culture. Twenty-five percent suggested getting to know your neighbors. An equal amount suggested keeping to yourself. Go figure!

So What’s It Gonna Cost Me?

The safety of a neighborhood is irrelevant if you cannot afford a roof over your head within its borders. Take a minute to look at the real estate reality in Clinton Hill.

Due to the neighborhood’s historical origins as sanctuary for the affluent, elegant brownstones and carriage houses sit next to standalone mansions.

Close to sixty percent of residents rent their homes or apartments in Clinton Hill, while just over forty percent own their digs.

The median home rent in Clinton Hill is two thousand five hundred for a studio or one-bedroom. A four bedroom can run as high as nearly twice that – four thousand six hundred!

That same studio will cost you upwards of 600k if you are buying it, while the four bedroom – hold your breath – is going to set you back over two and a half million! But don’t get too discouraged. That’s the extreme end. The median home price is only just over a cool mil.

On an interesting side note, Clinton Hill is actually the home turf of legendary late rapper Notorious B.I.G. Clinton Hill is a far more gentrified neighborhood now than when Biggie was writing lyrics about his exploits.

Here’s a fun fact: Biggie’s notorious former apartment is on the market right now for less than a million!

Biggie’s not the only claim to fame in Clinton Hill. One of the first inhabitants pre-gentrification was Oscar-winning director Spike Lee. Other celebrities who live in Clinton Hill include Rosie Perez from “White Men Can’t Jump” and Adrian Grenier of “Entourage” fame. Wonder if they ever get together for drinks or a nosh….

Top Of The Ranks

As mentioned, in many assessments, Clinton Hill is rated A+ as a neighborhood in which to dwell. That’s a general assessment, but there are more specific areas where Clinton Hill shines. It ranks high in a variety of more particular categories.

Some of the specific A+ categories include nightlife and diversity. Good for families also falls in the A rating spectrum. Health and Fitness and outdoor activities rate an ‘A’. Public Schools are considered exceptional and above average.

In general, residents in Clinton Hill include many craftspeople from architects to photographers and artists. Clinton Hill’s upper middle class segment is not just thriving, it’s growing.

Okay, Now How Do I Get There?

Clinton Hill is considered extremely walkable. There is plenty to occupy you along the trail and this article will cover that in just a moment. Public Transit service is another highly rated aspect of Clinton Hill, garnering an ‘A’ rating.

The subway lines which serve the Clinton Hill neighborhood are the A and C lines, which will take you into Manhattan. You can also catch a ride on the ‘G’ crosstown line. There are plenty of bus lines, too numerous to enumerate separately.

Your commute to important places in Manhattan will be speedy and efficient. If you work in the Wall Street/downtown area, your commute will be just thirty five minutes by public transportation and less by car. To get to Rockefeller Center, a hub of Manhattan, takes only forty to forty five minutes on the subway.

It’s an even shorter ride to spots like Williamsburg or DUMBO in downtown Brooklyn. Less than a half an hour!

Don’t forget cycling! Clinton Hill is friendly to the environmentally sound method of cycling. There are Citi Bike stations and bike paths throughout the neighborhood.

While you’re at it, don’t forget: What’s even better than cycling? Recycling!

But What Is There To Do?

The main avenues offer plenty of options. Clinton Hill has not been invaded by big name brands and chains. Save for the staples: Starbucks and Dunkin’ Donuts.

To access Clinton Hills mom and pop coffee shops and upscale indie boutiques, head over to Myrtle Avenue and Dekalb Avenues. You will also find great restaurants, bars and a variety of cuisine flavors ranging from Thai to Japanese to Mexican and Middle Eastern. SoCo even offers delicious Southern Fusion.

As mentioned, there is a lush, natural ambiance to the neighborhood. Outpost Coffee Shop has a backyard garden, for example. Best Pizza? That could spark an argument! Between the Luigi’s loyalists and the Emily’s enthusiasts.

Great classic Italian in the neighborhood is praised and noted as an asset of Clinton Hill. One such place is cleverly named Belli. It’s got a twist! It’s Argentine Italian food.

And hey, maybe you’ll run into Rosie Perez and Adrian Grenier grabbing a nosh together at one of the joints!

There are many attractive reasons to live in Clinton Hill besides food and coffee. There are other ways to have fun!

Some people have fun learning. Can you believe it? Loyal learners have plenty to discover at Pratt College. The school was originally founded in 1887 with the mission of training immigrants in the at the time very new vocation, engineering.

These days the college receives accolades for its interior design, industrial design and architecture programs. Pratt’s motto is inspiring: ‘Be true to your work and your work will be true to you.’

Even if you are not enrolled, it is pleasant to stroll the campus and admire two landmarks: The Rose Garden, which features a World War One memorial, and Cannon Court, where a Spanish bronze cannon brought from Cuba sits on display.

If sports are more your type of thing, you will enjoy Barclay’s Center, which is home to New York’s men’s basketball team, The Brooklyn Nets, as well as their female counterpart, New York Liberty. Barclay’s Center is modern and fresh, having opened in 2012.

Besides the historic buildings and architecture, many of which have been restored, there are some landmarks worth exploring. One of them is a brick building, now renovated into loft apartments, which was originally built in 1890. It was originally – fun factory fact! the Tootsee Roll factory and distributor for all of the United States!

For outdoor recreation, Fort Greene Park is nearby. The massive Prospect Park is also not far. Clinton Hill is spotted with plenty of children’s playgrounds and parks, making it ideal for young families.

Great! So Is Clinton Hill Safe?

Everything sounds great so far, no? Clinton Hill is an extremely gentrified neighborhood and you can pretty much rest easy there.

Even more respondents say that crime does not impact them that much and they feel pretty safe. Eighty-three percent! Close to eighty percent say the streets are well-lit.

The most common incident is felony assault. Nearly twice as many respondents in recent polls felt the police are visible and respond swiftly, as opposed to those who felt police were slow or underrepresented.

Overall, crime has plunged in Clinton Hill, with some dangerous pockets remaining. Still a far cry from the days when Myrtle Avenue was referred to as ‘Murder Avenue’. The newly developed high-rises have removed most of the drug dealers and shady tupes on sketchy streets.

What Do Residents Have To Say?

Residents say there is a big sense of community in Clinton Hill. Halloween trick-or-treating, events in the park and block parties!

Clinton Hill is described by residents as liberal, activist, funky and eclectic. They say it is diverse socio-economically and culturally. They add that it is quiet and – this is nice to hear in New York City – not too expensive.

Residents treasure their brownstone buildings and apartments, tree-lined streets and hidden gems. They call neighbors fairly nice. Again, that’s one of the highest forms of compliment in New York City.

Longtime residents marvel at the tremendous growth of Clinton Hill. Some go so far as to say they don’t find Clinton Hill to be in the least bit dangerous. One resident was even able to walk her brand new expensive laptop home alone on the streets at night!

Overall, residents seem pleased to live in Clinton Hill and with their surroundings.

Of course, as in any major metropolis, keep your wits about you! The usual precautions should be exercised.

Clinton Hill is ready for you if you’re ready for Clinton Hill. Good luck choosing the best neighborhood in New York City to call your home!