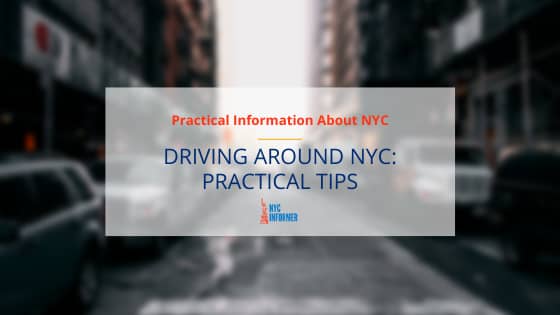 Siri has a lovely voice, but she can’t know everything! GPS can tell you where to go and maybe how to get there, but it’s no match for tried and true tips for driving in New York City from someone with plenty of experience.

Waze doesn’t always show the best route. But there are other ways. Read ahead to learn some top-secret methods for getting around on four wheels in the big apple.

Contents hide
1 It Pays To Prepare
2 Staying Cool
3 Saving Money
4 Picking Up The Pace
5 Take It Away, Drivers!

It Pays To Prepare

Be a boy scout. Well, a modern-day boy scout: google, google, google! New York started street construction over a century ago and seems to never have stopped! This can affect closures and your route, so stay updated in real time as much as you can. Even use the AM radio if you have to.

Have a backup route ready. Otherwise, you can get lost in a maze of overcrowded one-way streets. New York City is a grid, so you won’t go in a circle, but more like a square.

Look up local laws, just to be safe. Some rules of the road are unique to New York. For example, in New York, unlike almost everywhere else in the world, it is illegal to turn right on a red light.

Signs, signs, everywhere a sign! That famous song may have been written about New York City. There are signs for everything from parking to signs indicating an exception to the red light rule noted above. Pay attention to them.

While you’re looking around for signs – or parking – also look out for pedestrians. Pedestrians’ right of way is never more practically applicable than in New York. Even when pedestrian New Yorkers don’t have the law on their side, they insist on that right of way, so stay on your toes. For cyclists, too.

Honking your horn is another unique-to-new-york law. It’s illegal. That doesn’t stop anyone from doing it. Patience, my young street hopper. Returning fire never helps and road rage on jammed city streets is no joke. Practice zen breathing at stop lights.

In some European countries, a little sticker on the rear window indicates when someone is a new driver. No such luck in New York City. Hopefully new drivers will have attended Improv traffic school’s lighthearted drivers education course.

The city never sleeps, but it does rest. If you can, drive in the early morning or late night when the traffic lights are better coordinated and there is less commuter traffic.

“Hurry up and wait” is a famous phrase cautioning against speeding through traffic lights. Nowhere is this truer than in New York City. You may speed up to catch a yellow light and end up caught in the middle. Of the intersection. Blocking traffic.

This violation is known as “don’t block the box”. Which carries a huge fine in New York City. And you’ll have nowhere to go! So, be cautious and try not to hurry through traffic lights.

New York City has a parking peculiarity that is the bane of every car owner’s existence. It’s called alternate side parking. Depending on the day of the week, it is illegal to park on one or the other side of the street, for cleaning. So check those signs! If it’s empty, there’s probably a reason.

And fire hydrants. New York is serious about its hydrants. Don’t cheat the system and stay at least 15 feet away or it will be worse than a fine – you’ll get towed!

An alternative to risky street parking is a garage. Read the fine print. Often low prices advertised can have some conditions. Garages are less occupied during off-hours and many offer special rates in the early morning.

Picking Up The Pace

If you finally get fed up with the street traffic and want to zip around faster to a particular area, there are a few expressways which present an alternate option.

On the West Side, take the Henry Hudson parkway or the West Side Highway, depending on where you get on. They are a continuation of each other.

On the East Side, take FDR Drive. Uptown, try the Harlem River Drive or Riverside Drive.

Allow extra time to get somewhere. There’s always more traffic than there should be, unexpected detours, many occasions to groan and plenty of selfish, risk-taking fellow drivers so cut yourself a break. If you get to your destination early, well, great!

Take It Away, Drivers!

It sucks to get pulled over, but if you do get in some hot water, laugh it off at New York State approved Improv, the traffic school with a smile.

Basically, the take-away is: Gone are the days when your grandfather took you on a leisurely tour around town in his Pontiac. Be alert in unique New York if you’re behind the wheel. That’s the best advice there is.