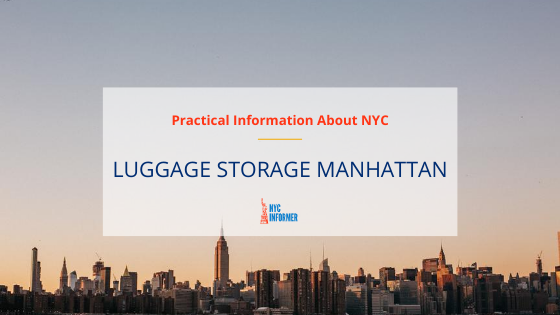 You’re in the Big Apple! Manhattan, to be exact — the heartbeat of New York City! But there’s a problem. You’re saddled with luggage on a 23-square-mile island teeming with millions of people and venues whose post-9/11 security measures forbid entry to visitors with large suitcases or baggage.

So what are your options?

Like all major cities, Manhattan is filled with tons of luggage storage options — but not all were created equal. As someone who travels to New York several times a year to see friends and family, I can assure you that one baggage service is leagues better than the rest: Stasher.

Contents hide
1 Our Recommendation for Manhattan Luggage Storage
2 What You Should Know About Manhattan: The Basics
2.1 Manhattan Orientation
2.2 Fun Manhattan Attractions
2.3 Central Park
2.4 Lombardi’s Restaurant in Little Italy
2.5 Governors Island
2.6 The MET, Guggenheim, or Natural History
2.7 Top of the Rock

Our Recommendation for Manhattan Luggage Storage

Sure, you can find luggage storage facilities at many subway stations and the major commuter hubs — Grand Central Station, Penn (Pennsylvania) Station, and the World Trade Center depot. But they’re less than ideal.

For starters, they’re expensive. Secondly, their locker facilities, which aren’t always a) the cleanest and b) the safest. And though New York is the city that never sleeps, luggage storage in Manhattan’s train stations do. For people with early or late flights, the depot luggage locker facilities’ 9 a.m. to 7 p.m. schedule isn’t workable.

As for the Lockers in subway stations? Well, they’re dangerous.

Why is Stasher better than other Manhattan luggage storage services?

What You Should Know About Manhattan: The Basics

Manhattan, one of New York City’s five boroughs, is a 23-square-mile island in the southeast corner of New York State. The East, Harlem, and Hudson Rivers separate it from the mainland, aside from a small patch called Marble Hill and a handful of islands.

Some people consider the West Side another main section of the city, but things downtown are tightly packed, so it’s a small distinction.

Manhattan is a cornucopia of historical sights, museums, cultural landmarks, outdoor activities, restaurants, and one of the world’s most-celebrated public parks. Tomes have been written about the island’s attractions, but here’s our slimmed-down list of five must-see sights.

A lush, 843-acre rectangular public park smack in the middle of Manhattan, Central Park can feel like a magic garden and serves as a country escape from the surrounding urban sprawl.

Hang out on the pond or picnic on the lawn. If knowledge is your jam, sign up for a tour with a park ecologist to learn about the grounds and woodlands.

Central Park is bordered by the following streets and can be accessed from all:

Located at 32 Spring Street in Little Italy sits Lombardi’s, the first pizzeria in the United States. Lombardi’s first opened its doors in 1905, and aside from a ten-year hiatus in the 1980s, the restaurant has been serving up outrageously delicious pizza ever since. According to culinary legend, after relocating to Chicago from New York, a guy missed Lombardi’s pies so much he hopped in his car and drove the 788-mile distance to satisfy his craving.

It’s not a big place, nor is it in any way fancy. But if you want a pizza that will elicit tears of joy, make time for a Lombardi’s pie.

Governor’s Island is a smaller island off Manhattan. In the earliest days, it served as a residential space and even boasts a castle. Then, for decades, the Coast Guard used it as an outpost. Today, it’s home to a specialized public high school that focuses on all things aquatic, and the island is in the middle of a giant refurbishing effort.

Only two people live on Governors Island full-time, but empty, historic homes, churches, and barracks dot the landscape, many of which are open for exploration. Overnight glamping on the island is also an option, and the “tents” resemble those used on royal safaris.

The MET, Guggenheim, or Natural History

Galleries and museums are a dime a dozen in Manhattan, but the big four are the Metropolitan Museum of Art, the Guggenheim, the Museum of Modern Art — aka MOMA — and the New York Museum of Natural History. Pick your intellectual poison. If life-size dinosaurs make you ooh and ahh, head to the natural history museum. If ancient artifacts and grandmaster paintings do it for you, head to the MET. Fans of modern art can choose between MOMA and Guggenheim.

Top of the Rock

Want a perfect, aerial picture of New York City? Go to Top of the Rock, the observation in Rockefeller Center, the plaza and outdoor ice-skating rink where a giant Christmas tree is famously lit every year.

Manhattan is an electric, exciting city. Don’t burden yourself with packages and luggage when exploring it. Instead, find a Stasher and stow your stuff! But most importantly, have fun!