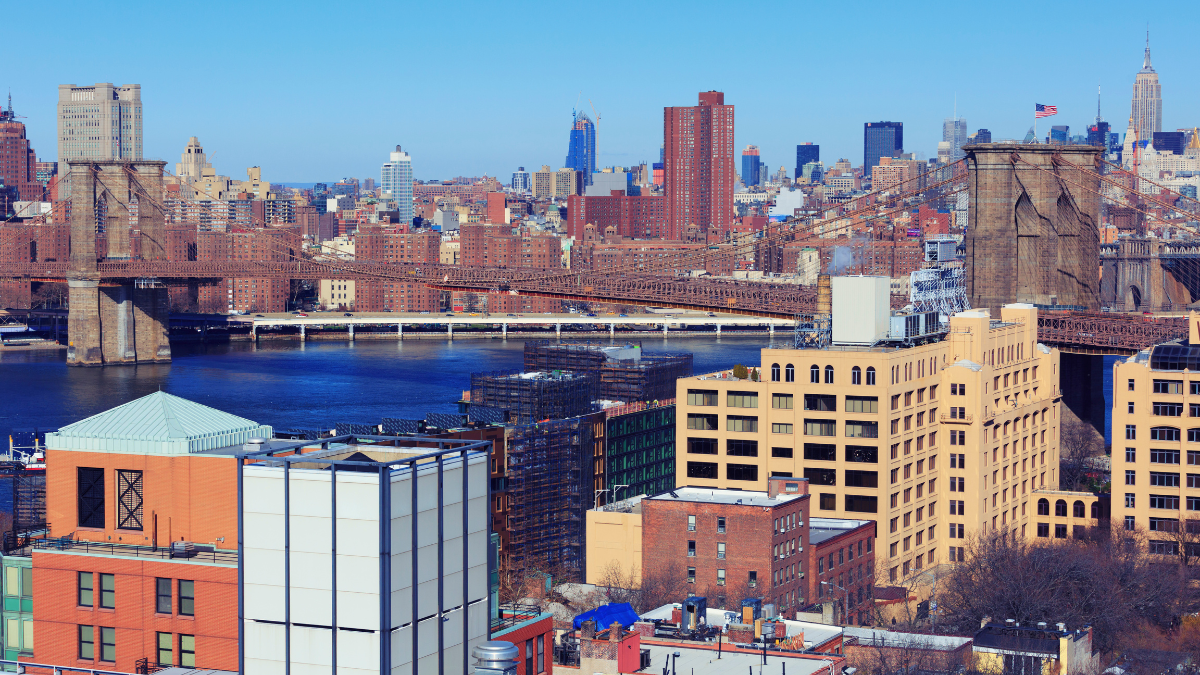 Of course you’ve heard of Brooklyn, arguably the most famous borough in New York City. Did you know it’s also the most populous borough?

But have you heard of Brooklyn Heights? No, no, it’s not the setting of the recently Oscar-nominated Lin-Manuel Miranda film “In The Heights.” That’s Washington Heights, which is in another borough you might have heard of: Manhattan.

Brooklyn Heights is in Brooklyn, natch. It’s an affluent ‘suburb in the city’ that has become very popular. It’s trendy, full of green spaces and located in close proximity to New York City’s burgeoning tech scene, which is right next door.

Does that mean it’s safe? That’s what this article aims to find out. Not an easy question to answer. Read on.

Contents hide
1 A Rich History
1.1 Crossing Borders
1.2 Every Kind Of People
2 Okay, But Can I Afford It?
2.1 Family Matters
3 But What Is There To Do?
3.1 From The Promenade To The Waterfront
3.2 Attracting Culture
3.3 The Art Of Architecture
4 Reaching The Heights
5 The Height Of Rankings
5.1 The Height Of Ratings
6 But Is Brooklyn Heights Safe?
7 Hear It From the Residents

Fun Fact! Brooklyn Heights is considered ‘America’s first suburb’, since its founding in the eighteenth century. At that time, circa 1834, the neighborhood was known as ‘Brooklyn Village’.

Brooklyn Heights has a rich history because it was first settled by bankers and merchants doing business in other parts of the city, who were seeking peaceful refuge. It was one of the first ‘gentrified’ neighborhoods in New York City.

The quaint roots of Brooklyn Heights can be recognized as you stroll streets named after fruits, like Cranberry Street, Orange Street and Pineapple Street. Sounds like one tasty Smoothee! Many of these streets can be recognized by their historic architecture.

The myth is that the streets were hastily renamed in anger by a bitter resident who was upset with the prominent families in the neighborhood. Ironic. Walt Whitman lived on Cranberry Street as a child and scenes from the film ‘Moonstruck’ with Cher and Nicholas Cage were filmed on Cranberry Street.

At the end of World War Two the neighborhood was in a bit of a downturn, the mansions having been subdivided and converted into multi dwelling units. But in the fifties Brooklyn Heights started bouncing back and today remains one of the most expensive neighborhoods in all of New York City, and the most expensive outside of Manhattan.

The borders of Brooklyn Heights are Old Fulton Street on the north, near the historic Brooklyn Bridge. Cadman Plaza West to the east, ironically. Atlantic Ave to the south and the BQE – the Brooklyn Queens Expressway, a major transport artery, to the west. Also to the west lies the East River.

Nearby neighborhoods include Boerum Hill, Cobble Hill, Downtown Brooklyn and DUMBO, which is an acronym for Down Under Manhattan Bridge Overpass. DUMBO is the previously mentioned neighborhood that is quickly gaining ground as the heart of an urban, east coast Silicon Valley.

In total, Brooklyn Heights covers just under a third of a square mile, believe it or not. The extra bonus of Brooklyn Heights is that it is also a waterfront neighborhood! The completion of the Brooklyn Bridge in 1883 made the district much more accessible from other parts of the city.

Brooklyn Heights historic district was added to the National Registry of Historic Places in 1966.

Every Kind Of People

The neighborhood is primarily white, three quarters to be exact. Followed by eight percent Asian, seven percent Hispanic or Latino, and five percent African American. The rest of the population is a mix of Native American, Pacific Islander, and other or mixed races.

Residents are considered mostly liberal with lots of young professionals in the mix. Close to half of the residents of Brooklyn Heights possess a Master’s Degree or higher. Over a third hold a Bachelor’s Degree. The rest have some sort of associate degree or at least a High School diploma. Well-educated bunch!

Okay, But Can I Afford It?

Maybe Brooklyn Heights is safe. That question will be answered a little later in the article. But is it affordable? What difference does safety make if you are priced out of the neighborhood?

Brooklyn Heights falls in the ‘dense urban’ characterization. There is a lot of choice in Brooklyn Heights, from breathtaking, incredible views of the bay to affordable modern apartments.

Median real estate in Brooklyn is on average over one million dollars, this being the average home value. Owners vs renters are fairly evenly split, with fifty three percent renting and forty seven percent of residents owning a house.

The median home price if you are buying starts at about a cool quarter of a million for a studio to four and a half million if you want to own that four bedroom.

As mentioned before, Brooklyn Heights is considered the most expensive neighborhood outside of Manhattan.

Besides being a great neighborhood for empty nesters, retirees, LBGTQ+ and young professionals, Brooklyn Heights is also an ideal setting for families.

Twenty percent of Brooklyn Heights residents are families with children. In fact, Brooklyn Heights comes in at number thirteen on the list of best neighborhoods in New York City for families! More ratings coming later in the article.

But What Is There To Do?

From The Promenade To The Waterfront

For a delicious bite, you can find anything from au francais to mediterranean and middle eastern to standard American. And of course, pizza!

Another strip attracting new residents to the area is Restaurant Row on Smith Street. Bar Tabac is a popular French restaurant on Smith Street, which holds a Bastille Day celebration every July. Clover Club and Verde on Smith are also worth a look-see.

As mentioned, Brooklyn Heights is a waterfront hood and you can eat on the waterfront as well. The River Cafe in Brooklyn Bridge Park and Estuary, located in the Marina, are two highly recommended establishments.

Being a neighborhood of young professionals, there are also a few options for bar hopping. The Long Island Bar makes legendary cocktails for decades as one of the neighborhood’s oldest watering holes. Craft Brews can be collected at Henry Street Ale House. And for cheap drinks, fun and games, try the popular neighborhood semi-dive Floyd’s.

Before or after a good meal, you can find a variety of ways to spend your time.

The first art gallery in Brooklyn was opened in 1958 in Brooklyn Heights. The simply named Brooklyn Arts Gallery.The gallery is intended as a space for artists to display their work without a lot of ‘red tape’.

Brooklyn Heights is home to the NYC Transit Museum, which in turn houses a fleet of vintage subway cars. The subway is an indispensable piece of New York City heritage.

The most attractive asset of Brooklyn Heights is the outdoor attractions, really. Start at The Promenade, which is a pedestrian walkway situated atop the cliffs. The view is not to be missed.

From the Promenade, also known as the Esplanade, you can catch a glimpse of the lady liberty herself over on Ellis Island and of the New York skyline, which is unmatched by any other metropolis in the world! The Promenade is a favorite locals haunt.

Below the Promenade is the previously mentioned Brooklyn Bridge Park, a sprawling outdoor wonderland. The park is full of surprises! A roller rink, for example! That’s right, a roller rink!

In addition to the rink, the park holds in its clutches athletic fields, a dog park, picnic areas, biking trails, walking trails, gardens, a beach and…ta-da! A ferry.

The Art Of Architecture

The word smorgasbord could very well have been invented to describe the buildings and structures that compose Brooklyn Heights. A variety of architectural styles delight the eyes.

You will see influences from styles throughout history, ranging from Greek Revival to Italianate, Second Empire, Victorian Gothic, Romanesque and Classical Revival. Many dating back to before Civil War times.

Fun Fact! The home office of the Brooklyn Dodgers was located in Brooklyn Heights and a plaque marks the building where Jackie Robinson signed his major league contract decades ago.

This all sounds great! Now how do you get there?

One of the reasons Brooklyn Heights is so attractive to young professionals is the easy commutes to areas where industry thrives and operates. Wall Street is just two and half miles away and with public transit you can shoot there in just ten minutes!

Almost every major subway line passes through Brooklyn Heights. The A,C, F, N, R, 2, 3, 4 and 5 lines all have a designated station. You can also pop into Manhattan by hopping on the NYC ferry at the Brooklyn Bridge Park stop.

The Height Of Rankings

Besides being number thirteen in best for families, Brooklyn Heights ranks high, of course, in a few other notable categories.

It even makes the list of best neighborhoods to live in all of the United States!

The Height Of Ratings

Brooklyn Heights rates A+ in health and fitness, nightlife and outdoor activities. The neighborhood gets an A in the ‘commute’ category and the ‘good for families’ category.

Brooklyn Heights slips into B-land in the categories of diversity and public schools, but it’s a B+ so still a plus!

But Is Brooklyn Heights Safe?

And finally, the moment you’ve been reading for. The burning question answered: Is Brooklyn Heights safe?

‘Safe’ is generally defined as a neighborhood where you don’t feel scared going out alone and don’t fear being harassed because you may be different. Where you don’t have to fear for the safety of your kids.

Brooklyn Heights is considered safer than eighty one percent of neighborhoods in New York City. The parks are well-lit with plenty of people around.

Brooklyn Heights is below average in property crime. Recently there has been a decrease in the number of larcenies, assaults and car thefts, a promising sign.

Brooklyn Heights is patrolled by the Eighty-Fourth Precinct, who report that crime has decreased eighty-two percent overall in the last thirty years. There are approximately twenty crimes per one thousand residents in Brooklyn Heights.

Overall, Brooklyn Heights is classified as having a below-average crime rate, the lowest classification a neighborhood can receive.

Hear It From the Residents

Residents of Brooklyn Heights have plenty to say and seem pretty satisfied. It has quite a reputation amongst those who dwell within its borders.

Residents say that the neighborhood feels very community-oriented while being artsy and that they say hi to their neighbors on a regular basis. The residents suggest that Brooklyn Heights has a welcoming atmosphere.

The open scenery is another attribute residents mention. They say they have never had any trouble and feel safe. It’s like a little town with all the glamour and opportunity of the big city. A glowing review, indeed!

In conclusion, residents mostly use the words ‘quiet’, ‘safe’ and ‘peaceful’ to describe Brooklyn Heights.

Sounds like a pleasant neighborhood. Maybe it is high time for a film or series set in Brooklyn Heights!