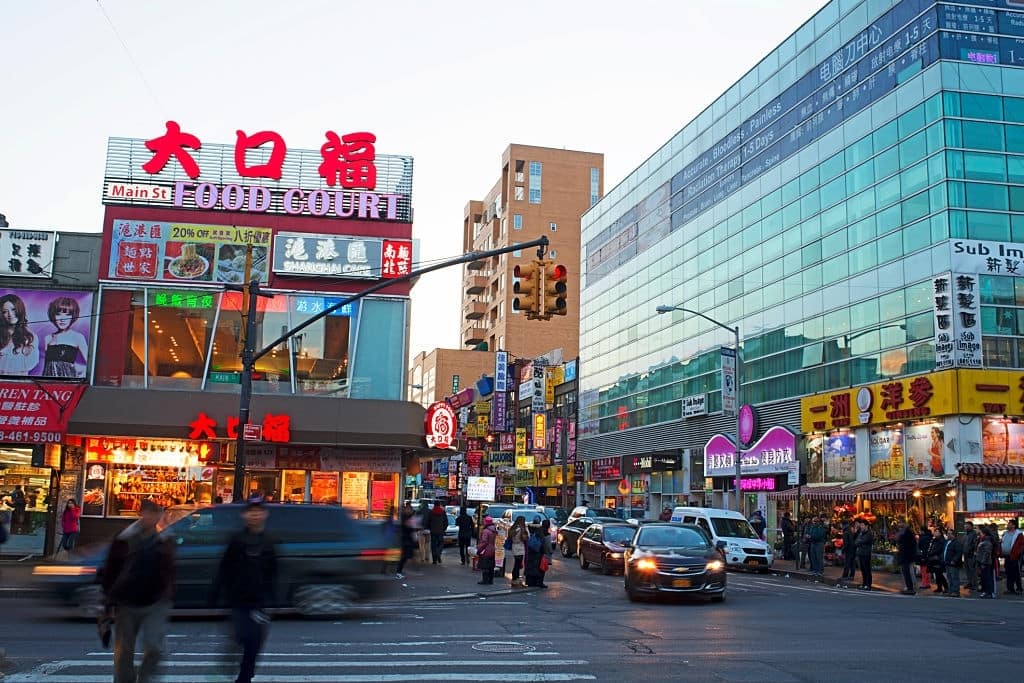 Is Flushing NY safe? You might have heard the old joke about Flushing Queens down the toilet. Well, Flushing, Queens is nowhere near going down the toilet. On the by and by, most residents say yes, it is one of the safer neighborhoods in New York City.

Contents hide
1 Bumping Boroughs
2 Getting To Know Neighborhoods
3 Flushing Facts
4 Flushing Landmarks
5 Flushing Transportation
6 So, Is Flushing NY Safe?
6.1 What Do The Residents Say?
6.2 What Do The Stats Say?
7 But The Food, Dude!

New York City is made up of five boroughs. Most famous is the one that we all know and love, Manhattan – which is an island, believe it or not.

The next two are Brooklyn and Queens, both of which are accessible by bridge or tunnel. Then there is The Bronx, which is north of Manhattan. Finally, the other island, Staten Island, which is accessible by ferry.

Fun Fact! Manhattan is not the biggest borough in the city of New York. In fact, it is Queens! Which is also the fastest-growing borough, and that’s why if you’re going to live in Flushing, you better get moving now! Before it gets filled up.

Getting To Know Neighborhoods

The boroughs of New York City are made up of tiny little pockets of neighborhoods clustered together, actually. The neighborhoods are incredibly diverse, each with its own culture and attractions and of course, idiosyncrasies. Flushing is one of those neighborhoods in the borough of Queens.

Plenty of reasons exist to live in Queens. One of the main reasons for many people is economy. The rents are much cheaper than Manhattan, where real estate is much sought after. Prices in Manhattan can be astronomical and prices both families and young professionals out of the market.

But another appealing reason to live in one of the outer boroughs – which is how the non-Manhattan boroughs are referred to – is that parts of them have suburban feels and are more family-oriented, retaining a sense of community that Manhattan, as sprawling as it is, often lacks. This appeals to a wide group of people. Flushing is one of these neighborhoods.

The neighborhoods often have a working-class feel and one drawback is that they can get a little crowded. For example, the overall population of Queens is around two million, four hundred thousand. The population of Flushing at last count was a little over seventy two thousand. One – hundred seventy six thousand if you include the subsections, within a radius of 853 acres. This results in a population density of about eighty four inhabitants per acre.

The average median rent in Flushing ranges from  one thousand five hundred fifty for a studio to between twenty five and twenty seven hundred for 2-3 bedrooms. Comparatively, when you get to the larger dwellings, that’s a very good deal to be a part of the city that never sleeps, even if it is in one of the outer boroughs.

Some of the aforementioned “subsections” include Murray Hill – not to be confused with the Murray Hill on the East Side in Manhattan, which is a rather affluent neighborhood. Other subsections include Linden Hill, Queensboro Hill and Waldheim. It’s a hilly hood!

Flushing is named for a town in The Netherlands called Vlissingen and was founded all the way back in 1645. It has become an increasingly diversified and gentrified area in the past decade. Primarily from transnational investment. The average median income in Flushing is around forty thousand dollars a year.

The neighborhood is primarily Asian, making up about two-thirds of the population, and Flushing even has its own mini Chinatown! One of the reasons so many residents rave about the cuisine in Flushing, which will be explored a little later in this article.

This is in addition to a number of other attractions which are increasingly drawing tourist traffic to Queens. Specifically near Flushing you have a number of landmarks worth noting.

Flushing is, most notably home to Shea Stadium, the playing field for one of two hometown NYC baseball teams, The Mets. The other NYC team is the equally well known Yankees. The Yankees stadium calls its home The Bronx.

The Mets won the World Series in a dramatic 1986 Game Six victory, their first title victory since 1969. They have since been National League champions and returned to the World Series a total of five times, including their victories in 1969 and 1986. The Mets have set a number of records in their storied history.

Their previous home, Shea Stadium, hasn’t just been home to sports records. It’s been home to artists who make a different kind of records – musicians! Most famously, hometown New Yorker Billy Joel and imported megastars The Beatles have performed concerts in Shea Stadium.

Not-so fun fact! – An important thing for you to know is that Shea Stadium is no longer called Shea Stadium and in fact it was demolished after one final farewell Billy Joel concert! It’s now called CitiField in honor of the bank that financed the new stadium.

If you fancy tennis over the great national pastime, you’re in luck! The Billie Jean King – not to be confused with Billy Joel, the king of Long Island –  National Tennis Center is in Flushing. It’s where the world famous US Open is played.

Culture and Education abound as well. You’ll find the Queens Museum, which hosts a wide variety of exhibitions on subjects ranging from Tiffany lamps to the city water supply. Plus, there’s the NY Hall of Science.

Queen’s Botanical Gardens is also located in Flushing, NY and here’s another little fun fact for you: During the eighteenth and nineteenth centuries, Flushing was considered to be “America’s premiere horticultural center”.

The Botanical Gardens are located in one of Queen’s most revered parks, Flushing Meadows Corona Park, home to the World’s Fair in 1939 and 1964 and where Grandma can still take junior on a day trip to see the Unisphere from the 1964 Fair, which is still on display in the park.

The aforementioned science center as well as the Queens Zoo are also located in Flushing Meadows Corona Park. Besides the attractions, the Flushing neighborhood also retains some classic charm as the architecture is predominantly made of the iconic red-brick buildings of eras past.

This is because, as noted by residents, the people coming to or from Flushing are often populated with fellow residents coming from the same social events or work hubs in Manhattan and the other boroughs as you might be. The terminals are often crowded and you don’t find yourself alone with unsettling strangers or empty cars.

The main subway line to and from Flushing is the number seven line, which is based out of the single busiest station in Queens. The trains run at all hours. The seven train is known as the IRT Flushing Line.

You can also hop on the LIRR, which stands for Long Island Rail Road, easily and conveniently from the Main Street and 41st Avenue terminal near Kissena Boulevard.

There is also a wide selection of Bus Line “Q” options for traveling on the bus. Catch some of the amazing views of Manhattan from both the train and the bus when traveling to and from Flushing, Queens.

So, Is Flushing NY Safe?

What Do The Residents Say?

Most residents report that Flushing is a pretty safe place, on the by and by. Some residents even use the adjective “thoroughly” to describe how safe it is. That’s a pretty ringing endorsement. You can hang outside all day and not witness a crime. You can walk safely at night. These endorsements all come straight from the mouths of residents.

Residents do advise that you stay alert. But that’s good advice anywhere, especially through

out all five boroughs of New York City – and don’t forget Long Island! Further they advise that really most crime comes from neglecting simple reasons you can control, such as locking the lock on your door, or simply being attentive.

It is reported that there is always a cop on duty at the corner of Main Street and Kissena Boulevard, near the aforementioned subway terminal. Also, attention has been called to residents’ efforts towards personal safety such as offering self-defense courses and community patrolling. The residents take an active hand in keeping their community safe.

What Do The Stats Say?

If official data makes you feel more comfortable, then here you go! Some recent official stats on crime and safety in Flushing, Queens.

Be warned, crime is on the rise in New York City in general, especially violent crime and property crime. Still, Flushing remains safer than about half the cities in New York.

However, in the same poll, many of the respondents reported a lackluster police response in the area, with almost half somewhat unsatisfied. An additional forty percent claimed satisfaction with their performance.

Helpfully, Flushing is home to a remarkable number of well-regarded educational institutions and schools with an international student body, thanks to the ethnic diversity of the neighborhood. Good schools help keep crime rates low.

Overall, officially, the crime rate in Flushing, Queens is just three, with an average of 8.7 felony crimes per one thousand residents. This falls somewhere in the middle of the grading values of a low and medium crime rate.

But The Food, Dude!

Safe or not, Flushing is worth braving or moving to just for the generous and delicious variety of cuisine!

Everything from South Indian cuisine served in an actual Buddhist temple to both the finest and most authentic of Korean and Chinese dumplings made from scratch! There are also fusion pubs that serve cocktails and modern twists on traditional dishes. Afterwards you can stop for a spot of tea and homemade desserts.

Lucky for foodies and families, Flushing is a generally safe neighborhood in Queens, New York City. Hope you find yourself comfortable there and that this article has been helpful. Bon Appetit!