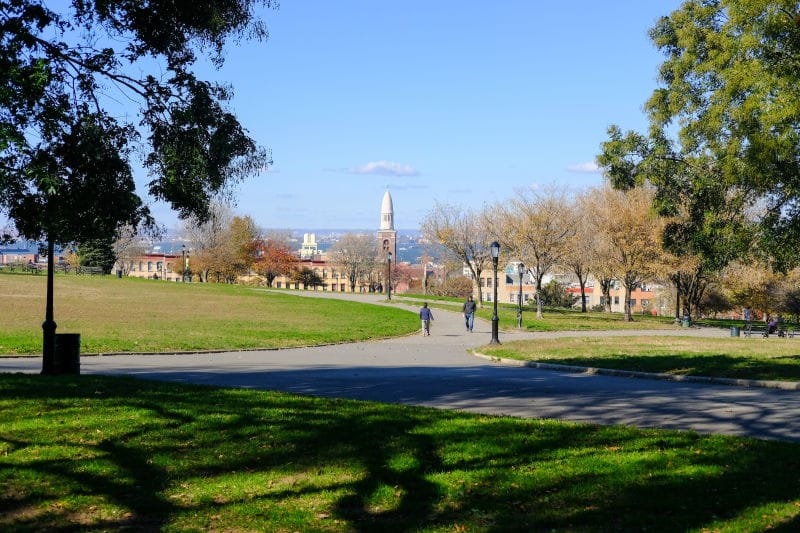 Nestled by the waterfront in the southwestern part of Brooklyn, Sunset Park is an up-and-coming neighborhood. If you plan to move or visit here, you’re probably wondering, is Sunset Park safe? Read on to learn more about the area before you plan your trip.

Before the first European settlements arrived in Sunset Park in 1636, the area was home to the Canarsee American Indians. Many of the structures in Sunset Park went up in the early 1900s, and the area gradually became an industrial powerhouse with busy warehouses and active piers. However, it was still considered part of South Brooklyn or Bay Ridge. It wasn’t until the 1940s and 1950s, following the decline of the industrial hubs, that the area was given the name “Sunset Park.” The main industrial part of the neighborhood, west of the highway, has currently been deserted for years.

The affordability of Sunset Park in the late 20th century attracted various immigrant groups to the neighborhood. Most of the population were Chinese, Indians, and Hispanics. By the 21st century, working-class Italian, Irish, and Scandinavians also called the area home. This neighborhood is defined by the Upper New York Bay to the west, Dyker Heights to the south, Green-Wood Cemetery and Borough Park to the east, and Gowanus and South Slope to the north.

The People in Sunset Park

Sunset Park is mainly a middle-class neighborhood with lots of Asian and mixed Hispanic communities living there. Along 8th Avenue, there is a vibrant Chinatown. It is one of the largest in New York City. 5th Avenue is the main artery and busiest strip with heavy Spanish populations and influence. In recent years there has been a younger population moving to the area as well. Overall, residents consider Sunset Park a diverse, friendly, inclusive environment.

According to the 2019 Census data, 130,783 people lived in the Sunset Park and Windsor Terrace 4 square miles area. That’s 32,582 people per square mile. The demographic breakdowns were as follows:

Situated on a hill sloping down to the waterfront, Sunset Park has a mix of real estate options. This includes apartments, condo buildings, early 20th-century rowhouses, brownstones, and renovated lofts by the water. The deserted industrial area is also experiencing real estate changes. Vacant buildings are being rehabilitated into housing, offices, shops, and creative spaces.

Renting is common in Sunset Park housing, with 69% of the population in rental units and 31% owning their homes. Most people also live in multi-unit structures (86%), and 14% live in single-unit structures. You can expect an average of $1,650 per month to rent a 1-bedroom apartment in Sunset Park. In contrast, the housing market trend to purchase was $1.46 million in January 2022.

Sunset Park is in school district 15, which has 50 different schools, including community schools, schools for creative arts, and math and science exploratory schools. The 4-year graduation rate of the over 29,000 students in the district is 71%. Compared to the rest of New York City, the residents in Sunset Park have a lower percentage of college-educated residents. The educational attainment data as of the 2019 census lists 30.7% with a Bachelor’s degree or higher and 31% of the population with no degree.

There are smaller colleges or field-specific high education places in Sunset Park. One of which is Thema Hepburn medical school and Daeman College. The closest private university to the area is Myers Field University. For people seeking informal knowledge opportunities, Sunset Park has their branch of the Brooklyn Public Library on 4th Avenue.

Overall the Sunset Park community is mostly liberal. It has 77% of Brooklyn residents voting democrat in the 2020 presidential election. However, in the November 2021 mayoral voting, a considerable number of Chinese residents voted for Republican candidate Curtis Sliwa due to frustrations over Democratic positions on crime and schools.

In the 7th and 10th New York congressional districts, they are represented by Democrats Jerrold Nadler and Nydia Velázquez. They are also part of the following:

The 72nd NYPD precinct is the only precinct that patrols the Sunset Park area. It is located at 830 4th Avenue and has been considered one of the safest precincts in the Brooklyn borough. Crime rates in the area have reduced by 76.8 percent between 1990 and 2021, including no hate crimes or shootings recorded at the start of 2022. The highest types of crimes recorded are grand larceny and petit larceny incidents.

While crime does exist in the area, most residents say they feel safe, and the crime doesn’t impact them as much. The area around 4th street can also get noisy, and some industrial areas feel uncomfortable walking through at night. There are mixed reviews on the speed of police response; in some areas, they are fast while others slower.

Several medical clinics and hospitals serve the Sunset Park community, with NYU Langone Hospital being the largest health facility. The area also has two fire stations and an EMS station at the following locations:

How is the Food in Sunset Park?

You’ll find a unique dining experience at Sunset Park, from trendy vodka distilleries to taquerias and mid-century Irish pubs. For example, the family-owned Irish Haven pub has had many local regulars for decades.

5th Avenue is well known for being full of taco trucks and other Latin cuisine favorites. For example, Ricos Tacos offers a variety of unusual cuts of meat, such as beef tongue. If you want Chinese cuisine and food stalls, take a visit to the Chinatown area, including the Fei Long Market food court for a local experience. There are also many dim sum spots, such as the popular Pacificana.

Other eating locations to try in Sunset Park include:

There are various public transportation options in Sunset Park, including ferry services, busses, street-level railways, and subways. You can also use commuter minivans called dollar vans that take you from Sunset Park to Flushing or Manhattan’s Chinatown.

Sunset Park is 4.2 miles from Downtown Brooklyn. That’s a 30-minute bike ride, 55 minutes by transit, and a 25- to 50-minute commute by car, depending on traffic. Commute times from other nearby locations include:

What are Sunset Park’s Main Attractions

The main park that shares the neighborhood’s name is also a popular community attraction. There are playgrounds, basketball courts, handball courts, a public pool, and lots of green space. The park’s highest point also offers great views of the Statue of Liberty and surrounding Brooklyn neighborhoods. Another park worth visiting is Bush Terminal Piers Parks by the waterfront that has walking paths, a nature preserve, and athletic fields.

Other attractions and fun things to do in Sunset Park include:

How about for the Children?

Many families live in the Sunset Park neighborhood, making it a good community to raise a family. Since it is growing at an impressive rate, more family-friendly destinations and activities are also available, including free entertainment. For example, the annual Street Festival hosted by the Sunset Park BID in September features a free bounce house and live entertainment.

Other fun activities to do with kids include:

Although Sunset Park is known for its Asian and Latino community, it has been identified as one of the 17 gentrifying neighborhoods in New York in recent years. It is getting more expensive to live there, and Asian and Latino families are finding themselves displaced by white residents.

Most street parking options are free when it comes to having a car and finding parking in Sunset Park. However, there are some metered areas and signage to watch out for. Generally, finding a parking spot improves as you move from 5th down to 4th and 3rd avenues.

There are pros and cons in every neighborhood, and we all have preferences from educational options to food. Being informed helps you know what to expect when visiting or moving to Sunset Park.