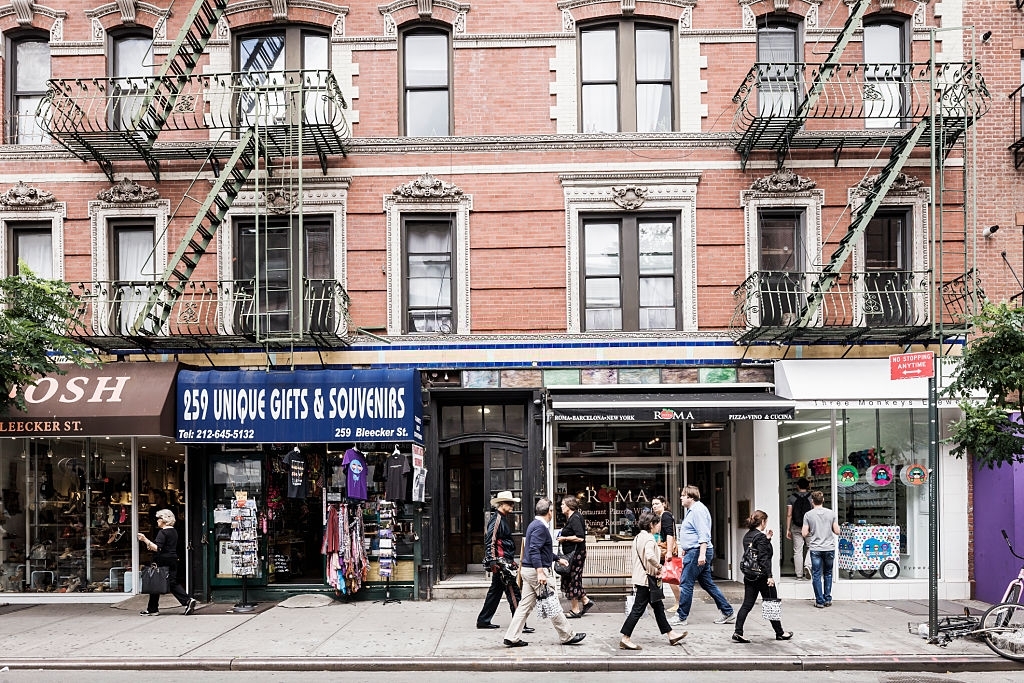 Are you planning a visit or move to Greenwich Village, Manhattan? You probably have many questions about what to expect, including how safe it is. Find these answers and more.

Greenwich Village is a neighborhood in Lower Manhattan surrounded by other interesting New York areas and sights, including:

The area was originally called Sapokanican by the Native Americans who lived there. The name changed after European settlers arrived, with Greenwich derived from the Dutch word Groenwijck, meaning “Green District.” Today, locals commonly refer to it as the Village.

In the 18th century, the neighborhood was mostly home to upper and middle-class people. However, the 19th century saw changes with diverse people moving to the area, including various artists. During the 19th century, Greenwich Village earned a “Bohemian Capital” reputation as a haven for artistic expression. It started with dancers, singers, and actors making a name at the Vaudeville Theatre, including Cole Porter. Then writers, abstract expressionists, and more artists moved to the area, including Andy Warhol and Lou Reed.

Many Italian immigrants settled in Greenwich Village and by the early 1900s over half of the residents in the neighborhood were Italians. Making little surprise why many family-owned businesses and historical establishments in the area have Italian influences. The neighborhood is also known for having a pizza place around every corner!

People in Greenwich Village / A Melting Pot of People

In 2019, the estimated total population of residents in Greenwich Village/Soho was 164,514 people, with a demographic breakdown of:

The neighborhood is suitable for both students, visitors, and local residents allowing a mix of backgrounds. Greenwich Village is also currently known for its LGBTQ community, especially for the multiple buildings landmarked as historic sites significant to LGBT history and with the LGBT Community Center located at 208 West 13th Street.

Greenwich Village is absent of skyscrapers but filled with beautiful architecture, townhouses, and brick-style homes, including well-preserved buildings built in the 1700s or early 1800s. You can even live in one of the areas sought-after residences known as Grove Court’s tiny 1850s cottages in the historic district.

Overall, this neighborhood is mostly residential, however, you can also expect all the amenities you need, including entertainment places like bars. Most residents find it a nice escape from the hustle and bustle of touristy areas in New York.

With so much history and being a prime location on the west side of lower Manhattan, purchasing a home can be expensive. The average housing market trend in Greenwich Village is $1.2 million to buy. The median rent in 2019 was:

For college students, the private research university, New York University, has a campus in the area, especially near Washington Square Park. In the surrounding areas is also the:

If you are looking for other educational avenues, Greenwich Village has two branches of the New York Public Library:

Greenwich Village is known by locals to be rather liberal and 86.7% of Manhattan residents voted democrat in the 2020 presidential election. The neighborhood is located in the:

How safe is Greenwich Village?

Overall, Greenwich Village is significantly safer than most of New York City, especially when looking at violent crime statistics. The NYPD’s 6th Precinct patrols Greenwich Village and reported an 81.8% decrease in crime rates between 1990 and 2020. Two fire stations also serve the neighborhood and the closest major hospitals are:

Residents have indicated that police and EMT services are commonly at your door within half an hour of calling. They also state that, although New York can be dangerous overall, Greenwich Village is one of the safest communities where crime rarely impacts them.

The diversity of food in Greenwich Village ranges from upscale restaurants to dive bars and, of course, Italian cuisine. Bleecker Street’s cafes, restaurants, bakeries, and butcher shops offer a foodies paradise of Italian heritage. Some locations, such as Johns Pizza, have been around since the 1920s! Other great pizza places on the street are Artichoke Pizza and Joe’s Pizza. Or grab a cannoli and cappuccino at Cafe Reggio.

While it’s tricky to narrow down the best places to eat, here’s a list of some cant-miss locations:

The underground subway, PATH rail system, and multiple bus lines all go through Greenwich Village, making it easy getting around without a car. They also have plenty of bike lanes and Citi Bike stations where you can buy a pass for bike rentals.

The subway stations in Greenwich Village are:

The subway lines and trains serving these stations are:

Bus routes in the neighborhood include the following:

The following stations are on the PATH route:

Besides good food, Bleecker Street is also known for its nightclubs, shopping, and live music. Take a visit to popular local venues such as The Red Lion, The Bitter End, and Terra Blues for some live music. Another must-visit street is MacDougal Street, which also has live music at the famous Cafe Wha.

If you are interested in history, Greenwich Village’s Historic district offers plenty of attractions to step back into time. For example the:

Last but not least to mention, Washington Square Park is located at the heart of Greenwich Village and an area many locals mingle, especially near the central plaza. The park has playgrounds, game tables, a chess plaza, dog-run areas, an outdoor stage, and other features such as a fountain and the 1982 arch. There are also plenty of events hosted there throughout the year.

What About for the Children?

As a safe neighborhood with great schools and plenty of parks, Greenwich Village is a family-friendly place to live and visit. From playgrounds for toddlers and picnic areas to basketball courts, there’s something for kids of all ages.

There are also plenty of parades, including the annual Halloween Parade, which is the world’s largest of its kind. You can even take a kid-centric guided tour of all the popular attractions in the neighborhood.

Other attractions great for the family include:

No residential permit parking is required in Greenwich Village and all unmetered street parking is free. But, be aware of commercial zoning or restrictions, especially for street cleaning. With so many visitors and residences, finding parking can be tricky. However, there are parking spaces you can reserve for a fee.

Although Washington Square Park is a great place to spend time, be mindful of protests that can also occur there.

With rents rising, some local stores and restaurants have closed and more chain brands are moving into the neighborhood. This includes bookstores turning into shoe stores.

With this information, you can now make an informed decision about moving to Greenwich Village or adding it as a stop on your next travel plans.