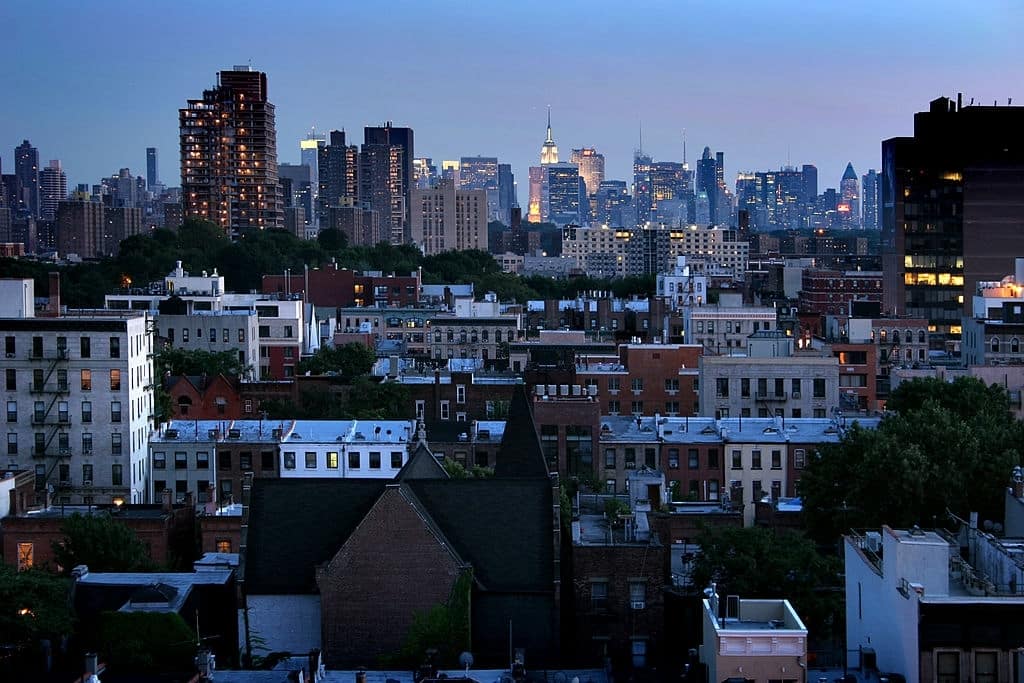 Harlem is one of the oldest neighborhoods in New York. In fact, one of the first to be settled, long before America itself was even a thing. Originally a Dutch Village, Harlem is actually named after a city in Holland called Haarlem. Much like Manhattan itself used to be called New Amsterdam.

First Fun Fact! Manhattan is named after the Indians which used to inhabit Harlem, the Manhattans Tribe, and there is a small subsection of Harlem called Manhattanville.

Harlem has been through many ups and downs over the centuries, but it didn’t really rise to prominence and become the place it is considered today until a period known as the “Harlem Renaissance”.

The Harlem Renaissance took place in the 1920s and 1930s. It was the result of an event called the “great migration”, when a large portion of the African-American population migrated from the South to the Northeast.

Contents hide
1 A History of Harlem
2 Boundaries of Harlem
3 Catch Some Culture
4 Nights Full of Nightlife
5 Still Standing
6 No Whine, Just Dine
7 The Style Of Harlem
8 Activities Under The Harlem Sun
8.1 A Notably Weird Sight

A History of Harlem

What happened during the Harlem Renaissance was a surge of African-American culture in areas of the arts such as poetry, theatre, literature, politics, dance and music. You may most identify the period with the birth of jazz.

Some of the most famous names from this era that you may recognize include Langston Hughes, Billie Holiday, Cab Calloway, Count Basie, Duke Ellington, Josephine Baker, Lena Horne and even Ma Rainey!

FUN FACT! Lots of notable people are from Harlem or live there now. Some of them wouldn’t be a big surprise, like Maya Angelou, Harry Belafonte, P. Diddy, Sammy Davis, Jr. or Malcolm X. Some you might not expect, like Fiona Apple, Al Pacino, Arthur Miller, George Carlin, Former Mayor Fiorella Laguardia, Houdini, The Marx Brothers and even Tito Puente!

So you never know who you could spot wandering around Harlem! That’s why this list will give you plenty of options, days, no, weeks worth of things to do in Harlem.

Nowadays, Harlem is becoming gentrified, like most of the rest of New York City, five boroughs and all. But Harlem is special because of its heritage and there still remains a large population of longtime residents working to preserve the history and keep the culture of Harlem very much alive.

There are no boundaries in Harlem, but…

Officially, it is buttressed by the Harlem River on the West and the East River on, of course, the East. So it is split into three sections: East, West and Central.

Harlem is populated by a number of small neighborhoods like Morningside, the infamous Sugar Hill, Washington Heights and the aforementioned Manhattanville.

New York City is very supportive of Harlem and its heritage and the Ivy League campus of Columbia University is nearby, so no shortage of cultural activities afoot.

For Literati, there are plenty of libraries. The Harlem Branch of the New York Public Library has been lending since 1826.

Also consider visiting the Harry Belafonte Library, which has been a part of the library system since 1907 and was renamed in honor of the musician-actor in 2017.

On a different note, if you want to explore the Harlem Renaissance era in depth, shimmy on over to the Schomburg Center For Research, which is dedicated to the period.

The next logical step from the library is to the museum. Harlem is home to a few unique museums which can broaden your horizons.

Appropriately, up first, is the National Jazz Museum, which was founded in 1995. It is dedicated to the history of jazz culture.

Remember El Barrio? Check out Museo Del Barrio. They house a permanent collection of thousands of pieces of Caribbean, Latino and Puerto Rican art, some dating back 800 years. The Museum is in an old firehouse where they used to burn books during the Civil Rights movement.

Museum of the City of New York focuses on New York City’s rich history of diversity.

Finally, take a step right into history, ancient history at the Cloisters Museum, in Fort Tryon Park in Washington Heights. Admire European Medieval and Renaissance art while immersed amongst the architecture of the time period.

Also worth visiting is the renowned Studio Museum, which specializes in art of African-American descent. Studio Museum has recently opened a satellite gallery called Studio 127 to host exhibitions and special events, located at 429 W. 127th St.

And we can’t leave out the stage. Harlem is famous for its innovation in the African American theatre community during the renaissance. Some of the theatres are even designated city landmarks. See what’s playing at Harlem Repertory Theatre, you can’t go wrong.

You can also catch a flick if you like. The flagship theater is Magic Johnson Theatre, which shows films on nine screens. There is also a documentary center and a Harlem Film Festival held annually.

Of course, there are the big famous groundbreaking venues like The Apollo. You might know The Apollo from the “Live From The Apollo” comedy series. Big musicians perform there regularly and a special night should be made of spending an evening there.

But if you want to kick it in Harlem like a hoodie, the local establishments offer pretty much everything you could ask for.

For games, get yourself dressed and head to Mess Hall, where board games cure your boredom. For more active gaming, try At The Wallace, where you can shoot some pinballs and sink some shots. If you’re a broke college student, 1020 Bar in Morningside Heights is the place for you and darts and pool.

For serious drinkin’, well, that depends – are you a beer buddy or a cocktail charmer?

Cocktail Charmers can head over to 67 Orange Street for vintage atmosphere and mixers. Sugar Monk for cocktails with ingredients you’ve never heard of, but wish you had.

Speaking of good deals, Lenox Saphire Bar is a great place to party with a DJ set, especially on five-dollar martini Mondays!

And we can’t leave out live music. After all, genres like hip-hop were invented there as well as the stride, or ragtime, style of jazz. Jazz is a fixture on the Harlem nightlife scene.

Minton’s Playhouse has to be mentioned first! It’s been in operation since the original thirties and can boast being the birthplace of bebop!

To go easier on your pocket, Paris Blues has no cover. The small bar has hosted live jazz almost every night since its inception in 1968.

Want to feel like you are actually experiencing Harlem during the renaissance? Try a speakeasy. Ginny’s Supper Club is most popular and best known. Bill’s Place is situated on the site of an actual real speakeasy of the thirties where Billie Holiday played. Ironically, it’s a byob.

If you’re still standing after all that speakin’ easy, why not take a walk around and admire some of the historic homes, buildings and monuments found in Harlem?

Strivers Row is a preserved street lined with historic houses built in 1891 that still have plots of land marked for horses and carriages!

Another American treasure who spent time wheelin’ and dealin’ in Harlem is the freewheelin’ Bob Dylan. You can go visit his former home, a historic townhouse worth millions of dollars, at 265 W. 139th Street.

Then there’s all the flicks that have lensed in Harlem! Blaxploitation classics in the seventies like Shaft and Superfly. Early hood hits of the nineties like Spike Lee’s Jungle Fever and New Jack City. Not to mention, more recently, The Royal Tenenbaums and American Gangster. Location walking tours are available.

Important figures are memorialized in Harlem. Statues you might wander by include Harriet Tubman, Martin Luther King, Adam Clayton Powell, and Duke Ellington at the center of Duke Ellington Circle. Keep your eyes peeled.

Frederick Douglass Boulevard and Malcolm X Boulevard are the main artery of the gentrification of Harlem and the dining and shopping scenes.

A particularly popular place on Malcolm X Boulevard is called the Red Rooster, a comfort food joint from celebrity chef Marcus Samuelsson. It is also the above ground counterpart to underground speakeasy Ginny’s Supper Club.

Speaking of celebrities, the popular celebrity haunt in Harlem is called Sylvia’s. Sylvia financed her neighborhood soul food mainstay by mortgaging her mother’s farm. Celebrities spotted there include Barack Obama.

Grange Bar and Eatery is another popular and interesting spot, a farm kitchen in the heart of historical Harlem, which serves crafted cocktails and dishes prepared from local sources.

There are two pricey but worth visiting establishments in Harlem. First, Melba’s, which serves old school southern fried home cookin’ like Grandmas, including a luscious mac n cheese. As Melba herself says, born, bred and buttered in Harlem.

The other is Londel’s. Londel’s offers the best of both Harlem worlds. Live Jazz on the weekends plus cajun and continental specialties.

For Dessert? Well, go ahead, Make My Cake. Not just a cute spin on a classic movie line, Make My Cake makes, well, cakes. And cupcakes!

The Style Of Harlem

The main shopping hub of Harlem is 125th Street. Everything from H+M to A and Z, including footwear!

A unique boutique worth visiting is Flame Keepers Hat Club, which specializes in luxurious headwear from Ecuador and Colombia. Also check out Harlem Haberdashery Boutique and Harlem Underground Retail Store, which can be found on Frederick Douglass Boulevard. A hoodie is also a great option to fit in with the local lifestyle 😉

Activities Under The Harlem Sun

Murals! The Graffiti Hall of Fame calls Harlem home and the most recent addition to the Harlem collection of street murals is jazz legend Dizzy Gillepsie. Tours are available.

FUN FACT! Harlem likes parades! Puerto Ricans celebrate Three Kings Day with a parade, and the African American Day Parade is always a wild time, if you happen to be around for either of them.

A hidden gem in the Harlem part of Central Park is Harlem Meer, a man made lake. Final Fun Fact! Meer is Dutch for “lake”.

Ever wonder what’s buried in Grant’s Tomb? Find out! The Ulysses S. Grant Memorial is in Morningside Heights and probably just has Grant buried in it. Supposedly his wife too. So not so much weird, but more notable. It’s the largest mausoleum in North America.

Now, are you ready to do the Harlem Shake? Shake to it!