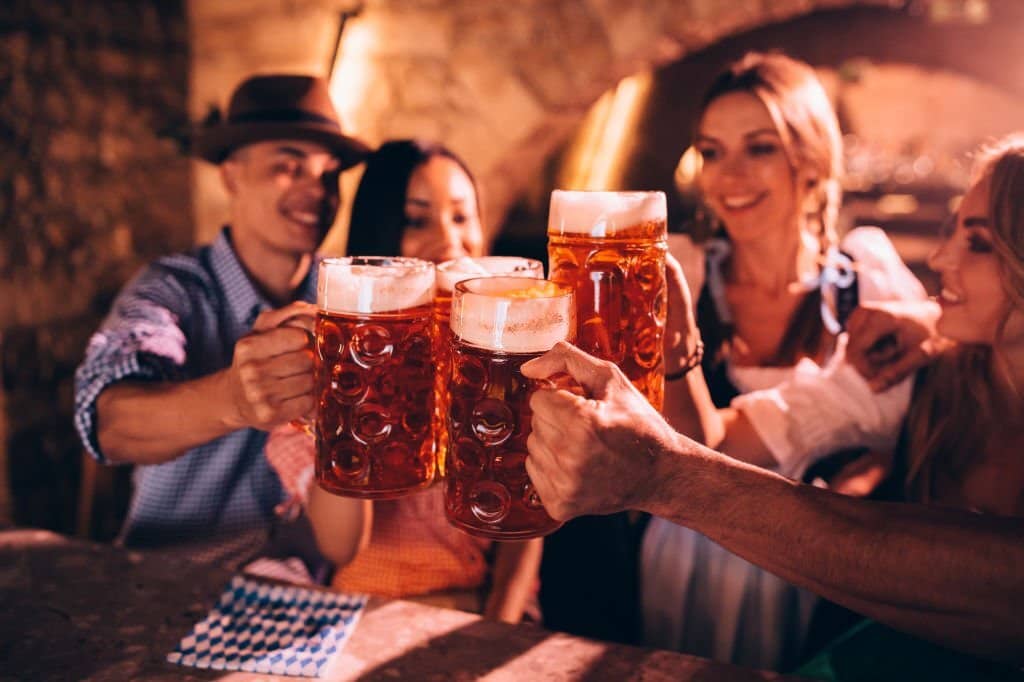 Oktoberfest in Munich, Germany, is the world’s greatest festival of Bavarian culture — Bavaria is a region in Germany’s southeast part known for beers, bratwursts, and the tradition of wearing bustiers. Every year, millions of people travel to Munich to attend this amazing two-week festival. The Oktoberfest is a well-organized festival, but if you’re one of the six million attendees each year, there are a few things to keep in mind regarding your trip’s organization. With over 2.2 million New Yorkers sharing a German ancestry, we thought this guide could be handy!

The history of Oktoberfest and why it is celebrated is a bit strange. It began on October 12, 1810, as a two-week celebration of the crown prince of Bavaria’s marriage to Princess Therese von Sachsen-Hildburghausen (who later became the queen). They invited the townspeople of Munich to their marriage outside the city gates; what we now know as the Theresienwiese.

The main event of this five-day wedding party was a horse race, but there was also a lot of beer and food! As a result, citizens wanted the festivities to be repeated, and Therese, Queen of Bavaria, decided to continue the celebration for the next years. The horse races on the fields were so popular and in 1819 they decided to make it an annual event, therefore Oktoberfest actually began with horse racing, not beer! So, that was the beginning of Oktoberfest, even though there were no beer tents or fairground rides at that time.

The original Oktoberfest is held in Munich, Germany, on the grounds of “Theresienwiese,” often known as “Festwiese” by locals. The grounds are essentially a public park for half of the year.

Around June, the construction process begins for the tents and fairgrounds, with a mid-September completion schedule, just in time for the festival’s start. This location has a total size of 420,000 square feet and is easily accessible from central Munich.

Bear in mind that if you’re a larger group looking for an easy and practical way to get around Munich as well as to and from Oktoberfest Irro Charter will be there to cover your transit needs. It’s a reliable company that provides buses for hire and one of them will be there during the whole festival duration!

When is the Oktoberfest?

Oktoberfest 2022 will begin at noon on Saturday, September 17th, and will conclude on Monday, October 3rd, 2022. Every year, Oktoberfest runs from September to the first Sunday in October and it lasts 16-18 days, depending on the year, with the majority of them taking place in September.

What to wear at Oktoberfest?

The traditional clothing worn at Oktoberfest is traditional Bavarian attire, which is worn for everything from church to weddings and family events. Note that during Oktoberfest, among the many parades that will take place, there will be one entirely dedicated to these attires.

Let’s see some details about the traditional attire!

So, the lederhosen is the men’s traditional outfit. It consists of suspenders that connect across the chest and are fastened to shorts or knee-length pants. They’re paired with thick knee socks and basic loafers and worn over a nice button-up, plaid, or otherwise.

The dirndl is a traditional Bavarian dress worn by both ladies and gents. It consists of a dress, an apron, and a white blouse. The bodice is designed to fit like a glove and highlight your ‘assets,’ so try it on before purchasing it. The length is another important factor to consider; dirndls are traditionally knee-length or longer.

Lastly, keep in mind that you’ll be on your feet a lot more than you think, so comfortable shoes are essential. The festival grounds are vast and you will definitely dance and walk a lot so try to avoid high heels.

The 15 spectacular beer tents (plus the Weinzelt for wine enthusiasts) that are set up during the two-week event are the main attraction of Oktoberfest. Yes, beer reigns supreme, but Oktoberfest is more akin to a giant fairground, complete with a carnival atmosphere and rides. Oktoberfest is known for its Ferris wheels, roller coasters, and other fair rides. Note that there are approximately 80 ride attractions in total!

While the carnival rides and activities are entertaining, the main action takes place within the beer tents. Approximately 7.7 million liters (1.7 million gallons) of Oktoberfest Beer are consumed during the course of the festival’s 17 days!

There are 14 major beer tents at Oktoberfest, each with its own personality, unique taste, and delicacies. They’re either owned by one of the big 6 brewers or by individual brewers. The 6 well-known breweries are Paulaner, Spaten, Augustiner, Hacker-Pschor, Löwenbräu, and Hofbräuhaus.

Every Oktoberfest beer tent has its own unique touch on the grounds of the classical Oktoberfest. While the choices and flavors differ slightly from tent to tent, they remain largely consistent. The most popular food choices are roasted chicken and pork knuckle, sausages galore, Weißwurst, currywurst, pretzels, and a lot of different styles of potatoes!

Keep in mind that the organizers of Oktoberfest have made an attempt in recent years to curb a growing problem with unruly, drunken people who were generating an uncomfortable atmosphere. The organizers have taken attempts to make Oktoberfest more family-friendly while still maintaining the fair’s oompah beer roots. To encourage family attendance, several tents hold a special “kids night” once a week.

The first Sunday of Oktoberfest has been designated as Gay Sunday, with celebrations held in the Pschorr-Bräurosl tent. The event’s de facto gay party, known in English as Gay Sunday and in German as Rosa Wiesn, takes place on the first Sunday of the two-week-long festival. Rosa Wiesn Oktoberfest is the most well-known of the festival’s LGBTQ+ events, and it currently spans three days, includes shows and music, and attracts nearly 8,000 attendees each year.

Note that if you need a bus hire for your group in order to ensure easy and simple transportation for the festival or for exploring Munich’s surroundings Irro Charter will be there to provide you with the safest transfer experience. And, they even have a Pridebus which will be there for the whole 2 weeks of the festival!