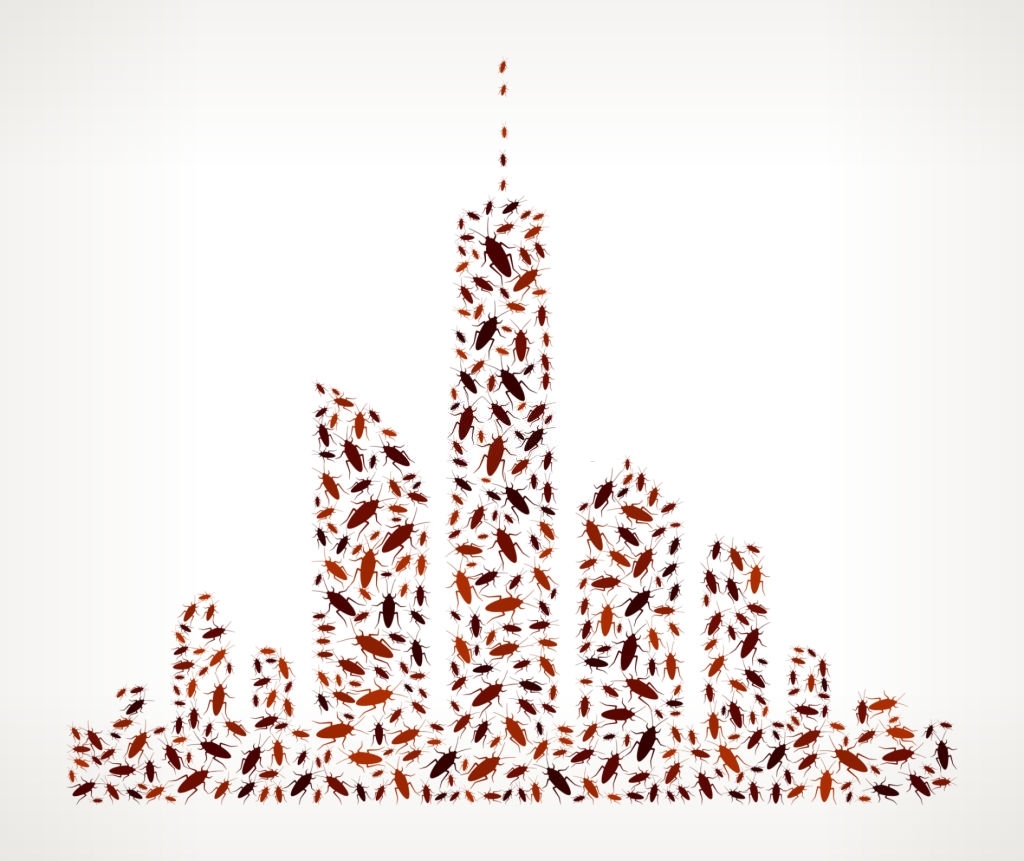 Crawling out of the drain. Scurrying across the wall. Hiding out in the cutlery drawer. And that’s a best case scenario. When it comes to roaches, it’s best to spray it, not say it!

Spraying is just one method. You will finish this article knowing more than you imagined you would ever want to know about cockroaches. Luckily, that information will include a variety of ways to rid your humble abode of the pesky nuke resistant creatures. Fast. Yes you can always call exterminators, but let’s learn a bit about the process along the way.

By the time you’re done with this article, you’ll practically be qualified to operate your own extermination company. Let’s start with some fun but repulsive facts about cockroaches.

Contents hide
1 Roach Round Up
2 The Rules Of Attraction
2.1 How Do They Get In There?
2.2 What Do They Bring With Them?
2.3 How Do I Know If I Have a Serious Infestation?
3 What Should I Do When I See Them?
4 What Can You Do To Prevent Roach Infestations?
5 Ridding Yourself Of Those Rotten Roaches
6 Homemade Roach Traps
7 Why Are There So Many Roaches In NYC? Is It Normal?

Ever hear the joke about da American cockroach and die German cockaroacha? No? That’s because there isn’t one. But someone should make one up.

That’s right, there are two kinds of cockroaches: imported and domestic. Die German and Da American. Guess they came over on the boat decades ago. And have since spawned over 4,600 variations of the species that have even migrated as far as Australia.

German cockroaches, the most common in New York City, average about half an inch in length and are tan or dark brown colored. American cockroaches are darker, a little red-ish and significantly bigger, varying from one and half to two inches long.

The average lifespan of a German Cockroach is disgustingly long. It has three stages: egg, nymph and adult. They spend 40-60 days in the egg stage, the nymph stage, which can last between one and eight months, followed by about seven months of adult life.

Female cockroaches produce capsules of eggs approximately every two weeks and each capsule can contain up to 48 eggs. Adult females may produce up to eight capsules during their lifespan.

Cockroaches can run nearly two hundred miles an hour – faster than a Maserati! They can withstand nine hundred times their body weight and live nearly a week without their heads.

They can regenerate limbs, antennae and even their eyes. They can run, jump and swim while holding their breath for up to 40 minutes. And with a uniquely strong immune system that murders harmful microbes, nothing is too inedible or unhygienic for them!

Cockroaches can survive pretty much anything and everything. Here’s the final fun fact: You might have heard that cockroaches can withstand a nuclear holocaust. This is because of a slower cell reproduction cycle. Unless the atoms catch them in the molting process, which is the exoskeleton growing phase, when they are weak and more vulnerable.

However, it is important to note they can survive blasts that would kill humans. But there are levels high enough that they too would succumb to the radiation. Phew!

Cockroaches could practically be superheroes if they weren’t so revolting. Now that you know a thing or two about their resilient powers, time to learn how to recognize an infestation.

The Rules Of Attraction

What might attract roaches to your home are first and foremost, unclean conditions. They are primarily searching for sources of food and water, which is why they are commonly found in bathrooms or kitchens.

They typically use water or sewage lines to gain access and travel into the home. Some of the common messes which attract cockroaches are dirty dishes in the sink, crumbs on the counter or the floor, pet food on the floor, leftover food in containers or cans, and garbage. These messes are mostly preventable.

Cockroaches can travel through a crevice as small as twenty five percent of their height in a matter of one second or less. Places they will be found are typically warm and moist areas – behind refrigerators, sinks, stoves and inside drainage systems.

How Do They Get In There?

Through cracks or crevices or holes in pipes and vents. Another thing to look out for – inadvertently carrying them home in cardboard boxes or shopping bags. Don’t move them with you if you change places! Even backpacks and luggage. Don’t leave your gym bag lying around – all that sweat is moisture, which attracts them.

What Do They Bring With Them?

Not just the smell. Cockroaches can carry deadly diseases, including salmonella, cholera, pneumonia and even tuberculosis.

They drop fecal remains and regurgitated food which can in turn contaminate your food. Plus the shells and other body parts can be an allergen and even adversely affect those who suffer from asthma.

How Do I Know If I Have a Serious Infestation?

Cockroaches are nocturnal creatures, thus it can be hard to tell because they scram when you flip on the lights. So if you see them crawling around during the day, it means they are over on population and under on food and water supply. Indeed, infestation.

Cockroaches prefer to chill in warm, moist places. That is their safe space. If there is an infestation, they will be seen in more unsafe places because they have been forced to expand their residences.

You will know for sure if you start to see tiny oval shaped capsules the size of seeds or nuts. These are the empty egg sacks, which means they are reproducing at an unhealthy rate.. Also you might start noticing little specks of what looks like black pepper. This is their fecal matter and is highly unsanitary.

What Should I Do When I See Them?

Call an exterminator! Make sure the exterminator is trained and licensed. But if that was the easiest option, you wouldn’t be reading this article.

If you live in New York City, chances are you live in a multi-unit dwelling. Talk to the on-site manager. It is probably not an isolated case. Also, talk to those living around you to see if they have a persistent problem too. Plus, it is common courtesy to discuss any pest control techniques you may be implementing with your neighbors, since they could be affected by it.

What Can You Do To Prevent Roach Infestations?

The best thing to do is not see them at all. You can take some preventive measures to increase your chances of a roach-free zone.

Ridding Yourself Of Those Rotten Roaches

Chances are if you are reading this article, it’s too late! In that not so rare case, especially in New York City, here are some methods to hand the pests a death sentence.

For a homemade, do it yourself remedy, make a beer trap! Pour a splash of beer in a jar and the roaches will be attracted to the smell of the beer and will drown in it. You didn’t know cockroaches were alcoholics too, did you?

Keep in mind a few things – one, the do it yourself methods are not guaranteed. They can be chemically harmful to pets and humans and worst of all, can be not so environmentally friendly, especially the aerosol-based bug bomb. If this is a concern, check the various products to see which claim to be least harmful to the environment.

One environmentally friendly thing you can do is something you will want to make sure you do after you are finished eliminating the infestation. That is to seal all cracks and crevices and other holes or gaps you may find with caulk, including the outside perimeters.

Caulk will work for smaller fault lines but for the larger holes or gaps, especially near pipes, you will need steel wool and foam. You can also create a barrier with wire mesh.

The most common problem areas include windows and doors, gas, electric or plumbing lines, attics, crawl spaces, vents, chimneys, the foundation and the roof. Installing weather stripping on doors and windows can help prevent pest problems.

Why Are There So Many Roaches In NYC? Is It Normal?

Yes, unfortunately. There are any number of reasons the cockroach population in New York City is so high. Ironically, clean air legislation is one of them. Apartment buildings used to have incinerators and the garbage was burned. Now, garbage is placed in trash cans destined for landfills, which attract the pesky vermin.

Some areas of the city are older or cleaner, which affects vermin population levels, and especially during holiday periods there can be severe sanitation issues. Also, the fact that there are so many restaurants around contributes to the infestation, since restaurants are breeding grounds for the little critters.

Before this article finishes, be reminded that cockroaches can be fun! If you can stand to see the creatures when you’ve defeated them, try watching the fun classic musical movie “Joe’s Apartment”, based on a series of MTV skits. You might relate to this New York City set story.

Or read Kafka’s “Metamorphosis” where the lead character transforms into a cockroach. Or dance the dance of la muerta around the buggy corpses while singing the Mexican classic “La Cucaracha”! Sounds like a celebration!