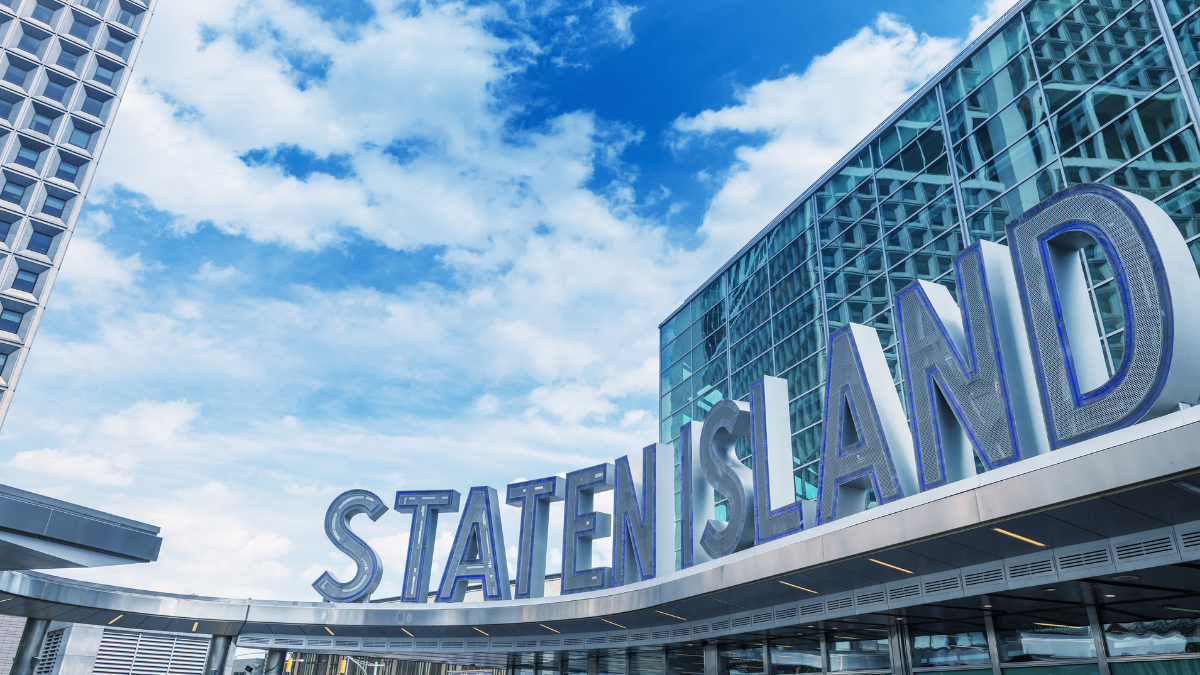 Contents hide
1 Take A Ferry To The Forgotten Borough
2 O Borough, What Art Thou?
3 The State Of Staten Island
4 Staten Island Stats
5 The Law of Attractions
5.1 Disadvantages? Okay, Maybe A Few…
6 If You’re Gonna Live Here…
7 How To Get To Staten Island
8 So, Is Staten Island Safe?

Take A Ferry To The Forgotten Borough

That’s a joke, of course. There are many more advantages to living in Staten Island beyond having somewhere to put your trash. One of those advantages is that Staten Island is probably the safest of all the five boroughs that make up the legendary New York City.

Borough? What? And there’s five of them? What’s going on? Read ahead to find out what the heck the five boroughs are and answer the question: Is Staten Island safe?

SPOILER ALERT: That question has already been answered. Read on to find out why.

O Borough, What Art Thou?

New York City is actually made of five boroughs. Two of them are islands. They are connected by bridge, tunnel, train, bus and ferry. Staten Island is one of those boroughs and one of those islands.

Brooklyn is maybe the second-best known of the boroughs, although that’s a subjective opinion.  Brooklyn is also the most populous borough.

Queens is the second most populous borough, with a population nearly equal to Brooklyn. It has a very residential and diverse vibe.

And then there is Staten island. Time to learn more about Staten Island!

The State Of Staten Island

Staten Island previously existed as roaming grounds for Native Americans, particularly the Lenape Tribe. It was settled by Dutch colonists in the seventeenth century.

The island formerly known as Richmond Borough, Staten Island got its present name when it was officially consolidated into New York City just recently, in 1898.

Staten Island is the third-largest in land area of the five boroughs. It developed rapidly in the sixties and seventies and now has a very suburban vibe.

You might recognize Staten Island when you see it, or maybe even be able to visualize it as you read this, because a great deal of films have been lensed on Staten island. They include ‘Donnie Brasco’ ‘The Godfather’, ‘Goodfellas’ and ‘The Irishman’ – sensing a theme?

Just kidding – other films include ‘The Astronauts Wife’, ‘How To Lose A Guy In Ten Days’, ‘Big Daddy’, ‘A Beautiful Mind,’ ‘Analyze This,’ ‘Splendor In The Grass’, ‘Working Girl’, ‘War Of The Worlds’, and of course, ‘The King of Staten Island’! All great films you should see if you haven’t already.

Although the third largest, Staten Island is the least populous of the five boroughs. In fact, it’s the only borough that clocks in with a population under one million. At least it’s over half a million. That’s actually more than Chicago and Cleveland!

Staten Island is a relatively wealthy borough. In fact, the wealthiest, beating Manhattan by a smidge. Manhattan boasts an average annual income of seventy-two thousand dollars: Staten Island tops it with seventy-three.

But it ain’t cheap. Staten Island has high taxes on property and food among other necessities. It ends up being pretty expensive to live in Staten Island, though less than some of the other boroughs.

Home values on average hit a half a million while rent is cheaper than the other island and the other boroughs: just thirteen hundred a month median rent.

Styles of architecture you will find in Staten Island include Greek Revival, Colonial and Victorian styles, Queen Anne and Second Empire, all very impressive.

The Law of Attractions

There are a lot of great reasons to visit Staten Island and even more compelling reasons to live there.

Despite the landfill jokes, it doesn’t get much fresher than Staten Island, ecologically. Much of Staten Island is protected wetlands. Most notable is an area known as ‘The Greenbelt’ where many residents enjoy hiking the trails and swimming in the freshwater pond. The Green Belt is notable because it was almost a highway until environmentalists stepped in.

There’s actually over 170 official parks, many with scenic lookout spots. And the beaches! It’s an island, so the ocean views are spectacular.

Staten Island benefits from a rich culinary history, thanks to the diversity of the island’s population. Popular restaurants offer choices ranging from German to Italian, Mexican and even Sri Lankan!

But the pizza!!! Mmmm…A unique style of New York pizza, the best in the world by most measures. Sorry, Napoli! Staten Island pizza is the original cheesiest, sauciest, crustiest New York slice!

The three best pizza places on Staten Island, by most consensus, are Lee’s Tavern in Dongan Hills, Rustic Pizza, Denino’s Pizzeria, Joe and Pat’s…oh, that’s four, nevermind, the list could go on the whole rest of this article.

That’s another attraction of Staten Island – live music and many talented local musicians. Some more famous musicians you may know who have lived in Staten island include Cristina Aguilera, Gene Simmons and Rolling Stone Keith Richards!

The deer population is getting a bit out of control. They came from New Jersey! Maybe even swam here! Kidding, but they are a threat to the natural protected lands Staten Island cherishes. Could be the most dangerous thing you’ll find on Staten Island.

The landfill jokes aside, Staten Island was for a long time home to the biggest dump in the five boroughs. It’s currently being reenergized into ‘Fresh Kills Park’ – which will make for a whole new set of jokes – but still, it still smells sometimes.

Traffic is almost always an issue on the island, winter or summer. Residents love their cars, and it can take a longer amount of time than anticipated to make it from one side of the island to the other. Which makes for a large helping of road rage, probably the most common ailment on the island.

Check out these neighborhoods, considered the best.

How To Get To Staten Island

Most famously, Staten Island is accessible by the Staten Island Ferry. The fare is free, which you could say is a fair price. It’s a beautiful and very serene journey and worth a ride. Did you know it transports over twenty million passengers a year! No, you didn’t!

Of course, that’s not the only way! That would be medieval! There’s buses and trains, of course. Limited bus service to Brooklyn and Manhattan plus a Staten Island Railway.

That’s not all. Probably the most majestic way to travel – in close competition with the ferry – are all the bridges. Staten Island connects with four bridges.

The glorious Verrazano Bridge, one of New York’s proudest achievements. The Bayonne Bridge, which takes you to New Jersey and all its scenic landfills. The Goethals Bridge – don’t try to pronounce it – will carry you to the Staten Island Expressway. Finally, there is the Outer bridge, which is actually a crossing so you don’t say bridge bridge.

So, Is Staten Island Safe?

It doesn’t stop there. Staten Island is also home to Fresh Kills, Arthur Kill and Kill Van Cull. Why all the kill-ing? Because New York City was originally settled by Dutch colonists. It even used to be called New Amsterdam. It’s not because the Dutch like to kill. No, no, no. ‘Kill’ is the Dutch word for creek. That never stops being amusing.

Statistically, Staten Island is home to plenty of pockets that are considered to be the safest in all five boroughs. One interesting factoid is that Staten Island has one of the highest police-to-person ratios in the United States. In general, Staten Island crime rates are significantly lower than that of the entire city or the country.

When determining safety, it is important to understand how to interpret and break down crime maps. Factors such as proximity to airports and parks or recreational areas, where populations are lower, come into play. Along with other factors like time of day or proximity to retail districts.

Statistically, a crime happens every one hour and forty-nine minutes on Staten island. Your chances of being a victim can be one in sixty-two in the northwest part or one in one hundred seventy-six in the southeast.

So it’s important to stay out of some areas to avoid crime and helpful to know which ones. Still, those chances are way more in your favor than the statistics for other boroughs of New York City. Staten Island is also statistically safer than ninety-five percent of cities.

Residents have a lot of nice things to say. They note how the island has a small-town vibe. They appreciate the seclusion from the rest of the big city. Some say growing up there was like something out of a movie.

Overall, both residents and safety reports note Staten Island as a calm, peaceful and safe place to live.

And lest it be forgotten, don’t forget to check out the awesome zoo everyone raves about!

Staten Island shouldn’t be the forgotten borough, even though even people who live there say ‘Which island is the fifth borough again? Was it Long Island or Staten Island? I forgot.’ All jesting aside, after reading this article, you should never forget.