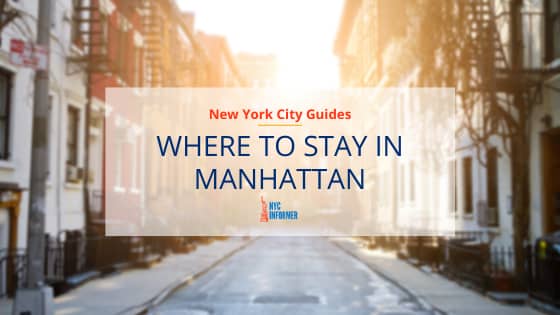 What’s great about visiting New York City is no matter where you stay, you’ve got the subway! To take you anywhere you want to go. And the manhattan grid system helps the subway to be far less confusing than in many other major metropolitan cities. But there are plenty of other factors in play when choosing where to stay in Manhattan. The following guide should help you decide.

Contents hide
1 Where to Stay in Manhattan
1.1 Midtown
1.2 Meatpacking District
1.3 West Side Eclectic
1.4 Financial District/Bowery
2 Staying in Manhattan on a Budget
2.1 Upper West Side
2.2 Lower East Side
3 Manhattan Off the Beaten Path

Where to Stay in Manhattan

The best place to stay in Manhattan depends on your state of mind. Each neighborhood has a distinct flavor and its own reasons to make your base there. First, a look at the best neighborhoods in Manhattan and why you might want to stay there.

Midtown is the neighborhood to stay in if you’re a first-timer who wants to play tourist and win the game! This is primarily the area between 30th and 50th streets and encompasses Times Square and Broadway, so if you want to step out of your hotel and into the iconic New York you’ve seen in so many movies, this is the place to be. But be warned – you will have to brave sometimes overwhelming crowds of people.

Midtown is one of the more expensive areas because it is right in the heart of the city, so keep this in mind. And it has the largest concentration of hotels in the city. The selections can be eclectic, like Pod51, a budget hotel with bunk beds that support its maritime theme. Posh is also an option. Try CitizenM Times Square – there you can enjoy the immortal and incredible New York skyline at their rooftop bar.

Alternatively, you can go a little farther in the other direction, to what could be called the lower upper west side – Lincoln Center on 62nd street.

It is a little cheaper and right in the center of culture in New York City, including many museums that can be visited on a tiny budget. It’s also considered the safest neighborhood in which to stay in Manhattan.

Yes, the meatpacking district. Unexpected, huh? The district includes Chelsea, on the west side in the twenties, as well as the South Street Seaport waterfront. This is a perfect area if you fall in a younger demographic. Most of the hottest and hidden clubs and nightlife are in this district. Hey, this is where Carrie’s bungalow was located on “Sex and the City,” so there must be something special about it!

Although the district itself has a kind of industrial vibe at times, nearby Chelsea and Union Square are bustling with the indie activity of New York. Chelsea has the High Line, a beautiful new installation where you can admire nature on a renovated train line above the city sidewalks. If you can afford to break the bank, stay at the luxurious Standard High Line Hotel.

Union Square is kind of an all-points central. You can toggle between the east and west sides, uptown, downtown, and midtown at the Union Square subway hub. Union Square also hosts hotels at more reasonable prices than you will find in the more typically tourist neighborhoods.

Lower Manhattan encompasses a few neighborhoods that represent the gritty myths and truths about New York City. They can be found on both the east and west sides of the urban jungle.

On the West Side is Greenwich Village, or The Village, as it is commonly known. The grid pattern ends here and the wild wandering begins!

The Village has fantastic restaurants and is famed for artists, many of whom can be found in the legendary Washington Square Park. The park is home to New York’s own mini version of the Arc of Triumph in Paris.

Nearby and still on the West Side is Soho, a boho neighborhood that is chic and upscale. You will find more variety in accomodation here than in the Village, which is still a primarily residential neighborhood. However, the hotels tend to be expensive.

When you move to the East Side, things get cheaper. More on that later.

Bustling by day, sleepy by night, but always exciting! The financial district has undergone a lot of redevelopment making it a much more attractive neighborhood in which to rest your head. During the day, it’s packed with stockbrokers, but also with sights to see.

The financial district includes one world trade center, the memorial complex commemorating 9/11. It’s the oldest neighborhood in New York, so you can take in a sense of history, while modern gentrification has led to lots of trendy new stores and restaurants to keep you firmly rooted in the present. Plus, when it clears out at night, you can get the sleep that just isn’t possible in most parts of “the city that never sleeps.”

If you don’t want to sleep, nearby is the fabled Bowery neighborhood. There are many appealing reasons to stay in The Bowery. The Bowery was once regarded as hippie heaven and was the heart of the eighties music culture in which new wave was borne.

Fittingly, that avant garde atmosphere still permeates the streets. Plus, CitizenM has a second Bowery location! The Bowery also remains a more affordable option than Times Square or other downtown manhattan areas.

Staying in Manhattan on a Budget

Of course, Manhattan is one of the most expensive areas in the world! Any of the options above are accessible if money is no object. But if you’re traveling on a budget, there are plenty of neighborhoods where you won’t miss a beat just because of your bank account! Below you will find some recommendations for the cheapest manhattan neighborhoods.

Yes, the upper west side is primarily a residential area. Which means you will find authentic New York restaurants and shops and a truer sense of “a day in the life of a New Yorker.” What you won’t find is tourist traps, just Zabars, the most iconic New York deli probably in all of history, on 81st and Broadway. No matter where you stay, make a trip there for a bagel, coffee and gourmet cheese and meats.

Some notable attractions on the Upper West Side include Gray’s Papaya, the most typically New York hot dog joint, museums all along Central Park West, the Dakota high-rise building where John Lennon lived and was killed, and Loews 84th Street, one of the oldest free-standing multiplexes in the city, as well as Symphony Space on 96th St., a community performing arts center.

The Upper West Side is considered one of the most affordable places to stay in Manhattan, and is also considered the safest and most family-oriented. Be sure to take your kids to Riverside Park along the Hudson River and enjoy a Zabar’s provided picnic.

One great affordable place to stay is Hi NYC Hostel on 107th street. It’s top rated and features amenities and entertaining activities, even hosting small film festivals from time to time. Plus, it’s right near Tom’s restaurant on 11oth and Broadway, better known as the “Seinfeld” Coffee shop. You’ll recognize it right away.

The Lower East Side is a mishmash of neighborhoods, each with its own distinctive flavor.

East Village is a really fun, hip neighborhood, equaling or maybe even surpassing its equivalent in the West. Here you will find St. Marks Place, a funky little strip full of tiny clubs where famous rock stars played, plus record stores, unique bars and restaurants and vintage shops. Eat, drink and dress like a true punk rocker!

Also on the Lower East Side is Battery Park City, another rejuvenated area of downtown New York. Nature greets you there, as before becoming a part of the city it was used by Native Americans for hunting and fishing. Since this waterfront oasis is near the financial district, weekend deals on accomodation are aplenty, because the business travelers have gone home.

Before winding down this whirlwind tour, take a moment for a walk…

Manhattan Off the Beaten Path

Two neighborhoods that are becoming gentrified but haven’t cemented their reputations are worth mentioning and exploring for better deals, if you don’t mind a little adventure. Plus they still offer that honest to goodness New York feeling.

First is Hells Kitchen, home of Marvel Comics “Daredevil”. It’s in midtown but farther south from Times Square, on the higher numbered avenues in the lower fifties. You can probably find cheaper accommodation here if you are up for taking a few extra paces to reach all the tourist action. It’s well-situated for many of the Broadway and Off-Broadway theatres housing acclaimed plays and musicals.

Finally, Harlem, baby! Harlem has been regenerated without losing its heritage or place in the books as the liveliest hood in all of Manhattan. Landmarks of soul culture abound and new hotels, including small bed and breakfast joints – to use Harlem slang – have sprung up. And oh my, that soul food!

Never disappointing, New York City has a neighborhood for everyone. Enjoy your metropolitan journey!