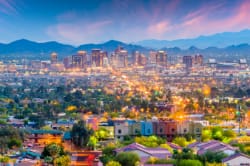 Cross-country moving is a huge decision for many Americans. It takes time, money, and a lot of planning to even decide on making that big move. If you’re from New York, it might seem daunting to relocate to the West Coast, especially if you’re used to the hustle of the Big Apple. However, a state such as Arizona is famous even among native New Yorkers.

Arizona has the sixth largest population in the United States, with its capital Phoenix as one of its fastest-growing cities. New York is highly populous, but its land area seems too crowded at times compared to Arizona.

If you want to start a new life or get a change of scenery, consider moving to Arizona. These reasons should help you decide on this worthwhile move:

As of this writing, the overall cost-of-living index of Phoenix is 108.7 compared to New York City’s 168.6. Despite being higher than the national average, living in Arizona is generally more affordable than living in New York. Getting a decent home in Phoenix and Scottsdale is easier on the pocket. You can even find reasonably priced luxury homes in the city with the help of The Kay-Grant Group when you finally decide to reside in Arizona for good.

Food and healthcare services are also inexpensive. The Copper State is one of the most tax-friendly states in the United States. So, you can get by pretty well, even if you have a small family with you.

Many people from the country’s northern half often relocate to southern states and retire there. You’ll find many retirees living out the rest of their life in someplace warmer and more appropriate for their health. Yet even younger folks and nuclear families move south for better opportunities and warmer climates.

New York can be unbearably cold during fall and winter. Meanwhile, Arizona is the best location to stay if you prefer hotter and sunnier weather. There’s no ‘true’ winter in this state, although it snows occasionally. However, the cold isn’t enough to get you freezing and reaching for your coat. You can leave your winter gear back in New York if you have the heart to do it.

Arizona is a stunning location for those suffering from seasonal affective disorder (SAD). You’re less likely to experience it if you’re in a place that seems to have only one season. Note that Arizona temperatures tend to rise to 90 degrees Fahrenheit or higher. Thus, if you decide to stay here permanently, ensure you drink lots of water and remain indoors as much as possible.

Being in Arizona means you’re closer to California and Nevada. These places are thriving with local and foreign tourists. You can take day trips to nearby tourist spots in Los Angeles and Las Vegas by car and return home after sundown.

Arizona is also close to Mexico. Hence, you could plan a vacation to this neighboring nation if you want an out-of-country trip that’s not too far from home.

Aside from visiting nearby out-of-town locations, you can stay in the state and still have a great experience. Arizona is where you can find the Grand Canyon, one of the country’s most significant natural attractions. It’s also one of the Wonders of the World, receiving almost five million visitors annually.

The canyon has two known rims: the North and the South, with the latter open to the public all year-round. You’ll find the majority of the tourists visit this part of the Grand Canyon. The South Rim has many hiking trails, including the famous Bright Angel Trail. If you’re not one to hike, you can visit the Yavapai Geology Museum instead, which features a fantastic view of the canyon from the museum’s location on a cliff.

Relocating to Arizona lets you visit a well-known and well-beloved natural tourist site. Because it’s within the state, you can plan a quick weekend getaway with your family after moving in and settling down.

New York is known as the business hub of the entire world, but you may have noticed some of your neighbors moving south to find greener pastures. Arizona has seen positive job growth among the states. Phoenix, in particular, has one of the largest industrial markets in the country.

Overall, many jobs in the city and the state usually cover tourism because of the favorable climate and tourist-friendly locations like the Grand Canyon. Besides that, you could also find jobs in trade, education, health, hospitality, and transportation. So, whatever your profession is, searching for a job should be easy before or after you finally move to Arizona.

Sports fans will enjoy living in Arizona. Golf lovers from New York will consider moving to this state when they get the chance. Arizona has around 200 golf courses open to golfers of any age and skill level. Even non-players can catch the Phoenix Open, a professional golf tournament held every late January or early February on the PGA Tour.

If you’re not into golf, you’ll still find a fun sport to do or watch. Arizona is home to other professional sports teams such as the Phoenix Suns for basketball, the Arizona Cardinals for football, and Arizona Diamondbacks for baseball. The city of Glendale is also where you’ll find two major stadiums, including the State Farm Stadium.

When you make Arizona your home, you’ll have access to these places and the chance to watch some exciting games when they happen.

Because of Arizona’s warm climate, there are a lot of activities locals can do outside. The state’s dry terrain and cliffs are excellent for mountain bikers, hikers, and climbers. Even if Arizona is known for being more of a desert, fishing, boating, and water sports enthusiasts can still find a home here. Thanks to all the open space, many Arizona locals and tourists enjoy horseback riding in this state. You can’t see much of that in New York.

The Copper State is generally a safe place to settle and is, in fact, one of the safest states. So, you can do any outdoor activity in your neighborhood, like walking your dog or jogging as if you’re in Brooklyn. Besides, you’re probably less likely to encounter or experience trouble in Arizona compared to New York, with crime rates dropping annually in the former.

Arizona is one of the prime relocation places for anyone in the United States. Its consistently warm climate, beautiful views, exciting activities, and safe environment make it a popular choice for those thinking of moving to a new state. These reasons should help you consider moving into the Copper State and staying there until whenever.