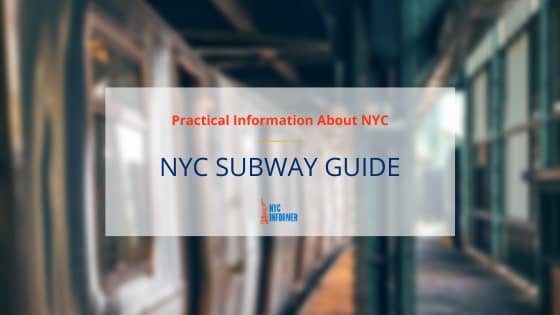 New York is a huge City. It is almost 7 times the size of Paris, which means getting from one point to another can be difficult without a good public transit system. On the other hand, The Big Apple is home to more than 8.6 million people. What’s more, the city receives around 65 million visitors annually, and most of them flock to Manhattan. Now, the island of Manhattan is only 13.4 miles long and 2.3 miles wide, giving it a total area of 22.7 square miles. In comparison, the city of Paris is almost twice the size of the island of Manhattan, yet the capital of France is home to only 2.2 million Parisians.

So, what you end up having is a city of contradictions. New York is an enormous place, home to a lot of people, but despite its size, it can get very crowded because the majority of people there concentrate on a piece of land that represents around 7% of the entire area of New York.

Contents hide
1 NYC subway guide
2 Myths surrounding the NYC subway system
2.1 The NYC subway closes early
2.2 The subway system isn’t safe
2.3 The NYC subway is always crowded
3 Using the subway system
3.1 Buying a MetroCard
3.1.1 Types of MetroCards available
4 Getting on the actual subway
4.1 The terms “Uptown” and “Downtown” matter
4.2 Even though they might run parallel, express lines and local lines are not the same
4.3 A map can be your best friend
4.4 Be prepared for maintenance delays

New York City relies on a strong public transit system, one that has at its core a large, complex subway system that confounds anyone who faces it for the first time. In fact, with more than 470 stations, the New York subway system is the largest in the world. It carries more than 1.7 billion commuters every year, and it has 36 lines.

So, even though the subway system is comprehensive, taking you wherever you need to go, especially in Manhattan, it can be intimidating to anyone using it for the first time. You can easily get lost or ride the wrong line without discovering your mistake until way later.

To help you grapple with this behemoth, here is a guide that will cover the basics and teach you how to navigate its different aspects. Let’s start with the most basic part any good guide should start with: dispelling some of the myths surrounding the subway system.

Throughout the years, numerous myths have spread about the subway in NY that it has almost garnered a notorious reputation. Yet, a lot of what is said is just that: myths and rumors that are far removed from reality. Here are some of the most famous:

However, there are a few caveats you want to bear in mind. First of all, even though the subways run 24/7, the trains run a little less regularly late at night than they do during the day. This means that if you want to catch a train at 4 am, your average wait time will probably be longer than if you wanted to take the same train at 4 pm.

Second of all, although the subway system is always open, some lines are shut down for repairs or maintenance. So, it is always helpful to know more than one way to get to your destination.

Finally, of the 472 stations spread out over New York, some of them do close late night. You can distinguish between stations that close early and those that never do by the color of the globes outside of them. Stations that close at night will have red globes outside their entrance, while 24-hour stations will have green globes stationed at their entrance. That said, the number of stations with red globes has been going down over the past few years, which means that you might not see one if you’re staying for a short period in NY.

This rumor is one of the remnants of a time gone by, the 1990s. Back then, the NYC subway system wasn’t safe; however, Bill Bratton, a police commissioner appointed in the 90s was able to turn things around, making New York one of the safest cities in the world.

Nevertheless, just because the system is safe doesn’t mean that you shouldn’t be vigilant. The subway can get crowded, and crowded spaces are a place where anything can happen. There are pickpockets, panhandlers, and aggressive individuals who will start a rowdy argument with you just for staring at them.

The NYC subway is always crowded

This one is sort of true, but not all times are the same. You usually have peak hours when the subway is extra crowded. These are usually on weekdays, which are from Monday to Friday, and during either the morning rush or the evening rush. And, just so you know, the morning rush usually takes place from 7 am till 10 am, and the evening rush lasts for another three hours, starting at 5 pm. Aside from these peak hours, things are pretty manageable.

Having covered the basics, let’s look at how you can navigate the subway system successfully, starting with the first obvious step, buying a MetroCard.

You can purchase MetroCards from specialized booths or from vending machines. Both options should be available in any of the 472 stations in the city. Now, at the booth, you can pay cash, and you get to speak to an actual human being who can answer your questions and give you a map if you need one.

Alternatively, if you would rather wrap things up quickly, you can purchase a MetroCard through the vending machine, but just bear in mind that not all machines take cash. So, have your credit card ready.

The kind of MetroCard you buy will depend on your usage. Broadly speaking, there are three main categories:

Which card should you purchase?

Don’t worry; we have you covered.

The answer in short depends on how long you are planning to stay in New York and how many rides you are planning to make. If you are just passing through, then a single use ticket seems as the clear choice. However, if you are staying for two or three days, then a Regular MetroCard might make the most sense. But, any more than 4 days, then an unlimited card will probably be the best choice, unless you don’t plan to move around a lot during your stay.

There is actually a breakeven point that will help you decide whether a regular card or an unlimited one is right for you. If you estimate that you are going to take 12 rides or less, with each ride being a one-way trip, then you should get a regular card and fill that baby up. Alternatively, if you plan to take more than 12 rides, then it is an unlimited card for you my friend. Now, take it from someone with a little experience in the matter, given how comprehensive the metro system is, you will probably be making way more than 12 rides if you are staying for 4 days or more.

There is one caveat to what was just said. Whereas you can swipe a Regular MetroCard four times in a row, you have to wait 18 minutes between every time you swipe your Unlimited MetroCard. Ergo, couples traveling together might have to calculate how many trips they plan to make conjointly before making a decision.

Getting on the actual subway

Having bought your MetroCard, you are now ready to get on the subway. To do that, here are the basics you need to know:

Using the MetroCard isn’t as easy as it seems

Unfortunately, many of the card readers at the turnstiles can get a bit fussy. If you swipe your card too fast, the reader might not work. If you swipe it too slow, you’ll still have the same problem. And, if the card gets bent as you are swiping, you are still going to have a hard time passing through. To make matters worse, New Yorkers are irritable people, so any prolonged delay on your part is bound to frustrate them, and you will hear about it.

Swiping into the wrong platform can be problematic, especially if you are at a small station where the only way you can get to the other side is to walk outside the station, get across the street, and wipe into the other platform. So, one way to distinguish which platform takes you where is by looking at whether the trains passing are heading uptown or downtown.

In most other parts of the world, downtown denotes a city center or hub, but in New York things are a bit different. Curiously, they are simpler in New York, where downtown literally means down town or south of the town, while uptown means north of the town. So, if you are heading south, then you want to take the train heading downtown. On the other hand, if you are heading north, just take the uptown trains.

Even though they might run parallel, express lines and local lines are not the same

It is worth knowing that if you get on an express line by accident when you actually meant to get on a local one, you will probably end up missing your stop as the express line is more than likely not going to stop there. Ergo, unless you’re comfortable using the New York subway, you’re best bet is to stick to the local lines until you feel confident enough to venture on an express line.

A map can be your best friend

Given its sheer enormity, you might need a map when you are still learning how to get around on the subway. There are maps in each station, but you might want to plan your route beforehand.

Fortunately, with the preponderance of smartphones, you can just Google maps to get around. If you type into Google maps your intended destination, the application will spot your current location and tell you the best and fastest route to where you want to go. This includes telling you which trains you should take as well as which stations you should transfer at. Google will even give you an estimate of how much time the trip will take you.

Be prepared for maintenance delays

As mentioned earlier, the NYC subway system needs consistent repair and maintenance, which means that some lines might be delayed and some stations temporarily closed. One way you can anticipate this is by going over the MTA website where any scheduled maintenance or any other delays are announced

All that said, riding the New York subway is like anything in life: It gets easier with time. You will learn from practice, and before no time, you will be navigating the public transit system like a pro. And once you do, you will just realize how powerful and efficient the system truly is.