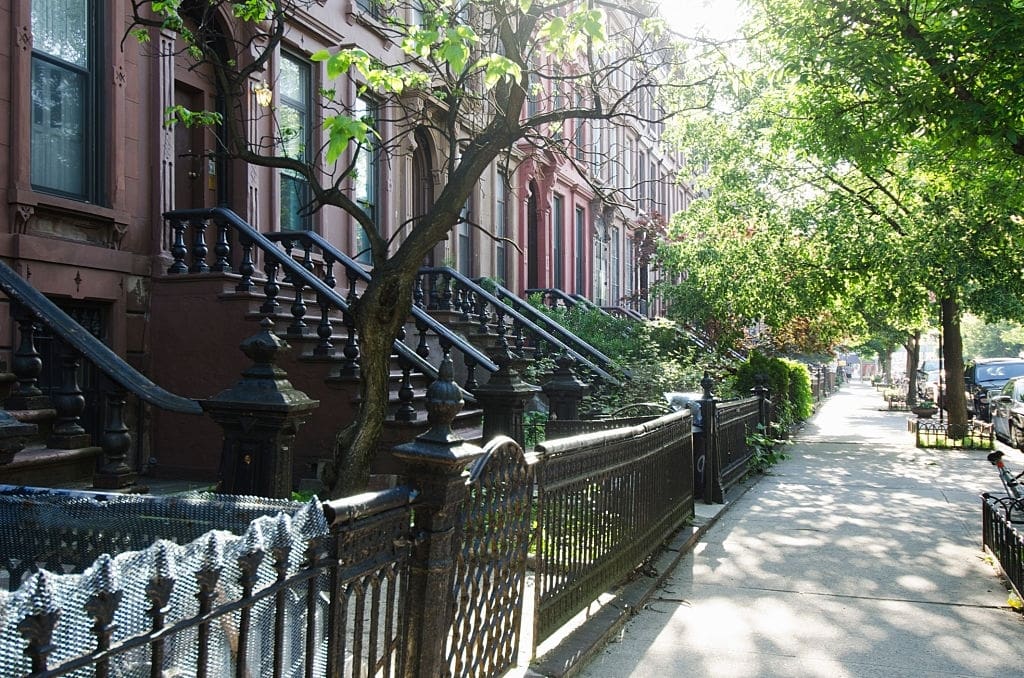 Crown Heights. How is it? Should I move there? Is it a safe place to live? Let’s find out all we need to know about Crown Heights.

Contents hide
1 A Brief History
2 And Then There Was Crown Heights
3 Crown Heights Kind Of People
4 The Real Estates
5 Getting Educated
6 Politically Grounded
7 Layers of Protection
8 But Where Do I Eat?
9 And How Do I Get Around?
10 Crown Heights Main Attractions
11 Won’t Somebody Please Think Of The Children?
12 What To Look Out For

New York City is in the state of New York in the United States of America. New York City is one of the most populous cities not just in the nation, but in the world. Sometimes it is even referred to as “the capital of the world.”

New York City is split in five boroughs: Manhattan, which is an island. The Bronx, which is on the same island. Queens and Brooklyn, which are over the river and accessible by bridges and tunnels. And finally, Staten Island, which as its name suggests is also an island.

The Boroughs came to be in 1898 as a result of a consolidated city charter. Each of these boroughs are constituted by a collection of smaller, diverse neighborhoods, each with their own name.

And Then There Was Crown Heights

Crown Heights was originally occupied by the Lenape Indian tribe. It saw its first European settlers around 1660. Soon after it became a trendy bourgeois neighborhood.

A notable fact about Crown Heights is that it includes an historic area known as “Weeksville”. Weeksville was founded by free slaves in 1838, 11 years after the abolition of slavery in New York. It was established by an entirely African American coalition.

Crown Heights has gone through significant mutations over the decades but now is becoming a primarily gentrified neighborhood, while retaining its old school village charm. It might even be safer than ever.

Another attraction of Crown Heights is the affordability of things in comparison to other parts of New York City.

What is the population of Crown Heights? You could say it’s the definition of diverse. The number of different cultures that have settled in Crown Heights over the decades is what brings the flavor to this unique hood.

Crown Heights remains primarily African-American, with immigrants from the Carribean and the West Indies plus Afro-Panamians. There is a large population of Hasidic Jews that maintain a presence in Crown Heights society. Young hipster professionals have also been moving in, attracted by low prices.

Residents come from multiple socio economic backgrounds but the unifying factor is community. Neighbors tend to play sports together and have parties. The kind of folks who will wave when they pass you by.

Believe it or not, a long time ago, a section of Crown Heights called St. Mark’s District had more millionaires living in it than any other part of Brooklyn! Memories of this bygone era remain in the form of gothic mansions. That’s why some former residents still host walking tours.

Some of the architectural styles on display in Crown Heights include Greek Revival, Gothic Revival, Georgian, Baroque, Queen Anne, Romanesque Revival, Renaissance Revival, and Beaux-Arts. Sadly, ninety percent of the mansions were torn down between 1925 and 1930 and replaced with standard six-apartment structures.

The value of houses considered middle tier are median six-figures. And upper – the average is around 850,000 dollars. Many properties cost upwards of one million. You can find adequate dwellings for as low as 200,000. The average rate per square foot is 35.00. Most buildings are low-rise.

Rent is pretty cheap by comparison to the rest of New York City. While average rent is a bargain 1,659 dollars, a one-bedroom will run you upwards of and at least 2,000. Multi-Family homes and single dwellings are available. The average square footage is 845.

However, supply is low and demand is high.

The general level of education in Crown Heights is pretty much on par with the rest of the city. About half the residents are college-educated or have at least some college.

Crown Heights has a wide network of uniquely diverse High School educational facilities as well as Medgar Evers College and a number of gender-segregated schools. It is a good place to educate a child.

If you want to self-educate, you’re in the right place. Crown Heights is home to three NYPL libraries, including the Eastern Parkway branch, which was renovated as recently as 2016. Plus, museums aplenty, including Brooklyn Museum and Weeksville Heritage Center, plus two museums for children – Brooklyn Children’s Museum and Jewish Children’s Museum.

The neighborhood is represented locally by Brooklyn Community Boards Eight and Nine, depending on your side of Eastern Parkway.

Crown Heights is protected by two police precincts. South Crown heights is patrolled by the 71st Precinct, while the North is covered by the 77th precinct.

The crime rate has decreased significantly since the nineties, down over 85%. In a 2010 study, the two precincts ranked 41st and 46th safest precincts, respectively, out of 69 total.

Residents say the neighborhood feels both safer and quieter and they feel comfortable walking around any time of day or night.

But Where Do I Eat?

Ahh, Crown Heights is stuffed with yumminess. A true multiverse of flavors: Korean Fried Chicken, two sushi restaurants, an all-vegan eatery, somewhere around four Indian restaurants and two burrito and Latino cuisine joints. And then there’s all the Caribbean tastiness.

The main commercial streets are Nostrand, Kingston and Franklin Avenues. Franklin Avenue is where you will discover most of the fu-fu food. If you want to go Kosher, try the Kingston area. One spot locals call “kosher” is Gombo’s Heimishie Bakery. Nostrand is like the “Little Indies”.

BBQ and Brisket? Try Izzy’s BBQ. Chavela’s for Mexican and patio dining. Sushi Spot and Nori Bar are two sushi places esteemed by locals. They are both on Kingston Avenue, which you also find Jenny’s, a Dominican place known for its pancakes.

And what is New York City without Pizza? The best pizza place in Crown Heights is Barbacino, which boasts a wood oven, also on Franklin Avenue. Also, don’t miss Butter and Scotch, which mixes baked goods with booze.

For home dining ingredients and assorted treats, there is a great Farmer’s Market near Eastern Parkway. Many residents say their favorite thing to do on Saturday Morning is take a walk around the market.

And How Do I Get Around?

Transportation and transit in Crown Heights functions like the rest of the system in the five boroughs. Believe it or not, a lot of people just cycle around. Eastern Parkway is a nice place for a leisurely pedal.

To get around locally, there are a number of buses offered. To get into downtown Manhattan, it takes only about 45 minutes by subway, or even less sometimes. Most major subway lines pass through Crown heights. You can catch the 2,3,4 or 5 and the A,C,B, and Q nearby and accessible via the Franklin Avenue shuttle.

The Franklin Avenue shuttle is another option that links the neighborhood and also crosses into other parts of Brooklyn. There are also Long Island Rail Road (LIRR) stops in Crown Heights that will take you out to Strong, I mean, Long Island.

Pro Tip: Don’t take a job above 42nd Street. The commute is exhausting.

There are so many attractions in Crown Heights, starting with the Brooklyn Botanical Gardens, which help light up the district.

Every year on Labor Day Crown Heights hosts the West Indies Day Parade. Originally started in Harlem, the parade was transplanted and name-checked by Jay-Z himself in his NYC anthem “Empire State Of Mind”. As many as three million people convene to watch the elaborate dances and admire the extravagant costumes.

There are a lot of Parks in Crown Heights, first and foremost Brooklyn’s biggest park, Prospect Park, which runs through Crown Heights. There is also Brower Park near the Children’s Museum and the city is pouring millions of dollars into upgrading Stroud Playground. Lincoln Terrace Park is also a community hub with green spaces and basketball courts.

Not too far a walk is The Barclay Center, home of the eponymous Brooklyn basketball team, the Brooklyn Nets.

And other neighborhoods are easy to reach, such as Bushwick, if you are looking for a thriving nightlife, or Kings Theatre, a notable performance space in nearby Flatbush.

Won’t Somebody Please Think Of The Children?

Crown Heights is a great place to raise children. Great public elementary schools, high schools and private institutions, all within walking distance. And it’s safe for your kids to walk there.

Plenty of outdoor recreation for the kids. All the aforementioned parks, some of which include everything from baseball fields to tennis courts to handball courts!

Overall, Crown Heights is considered by its residents to be very family-friendly with a warm and healthy sense of community. There are plenty of activities for families to enjoy together, inside and out.

What To Look Out For

Parking is becoming more scarce due to new bike lanes. There is some traffic congestion and complaints about rats – but that’s New York livin’, right?

There is a shortage of available housing in the center. You might have to look on the outskirts.

Also, be aware that the Western and Eastern parts can feel very different.

Overall, women can feel safe walking through Crown Heights, Thanks to increased police monitoring and an overall drop in crime in the city. Also, new residents tend to be wealthier than the old ones, moving along the process of gentrification in a positive direction.

Now you should have all the information you need to make a well-informed decision about Crown Heights.