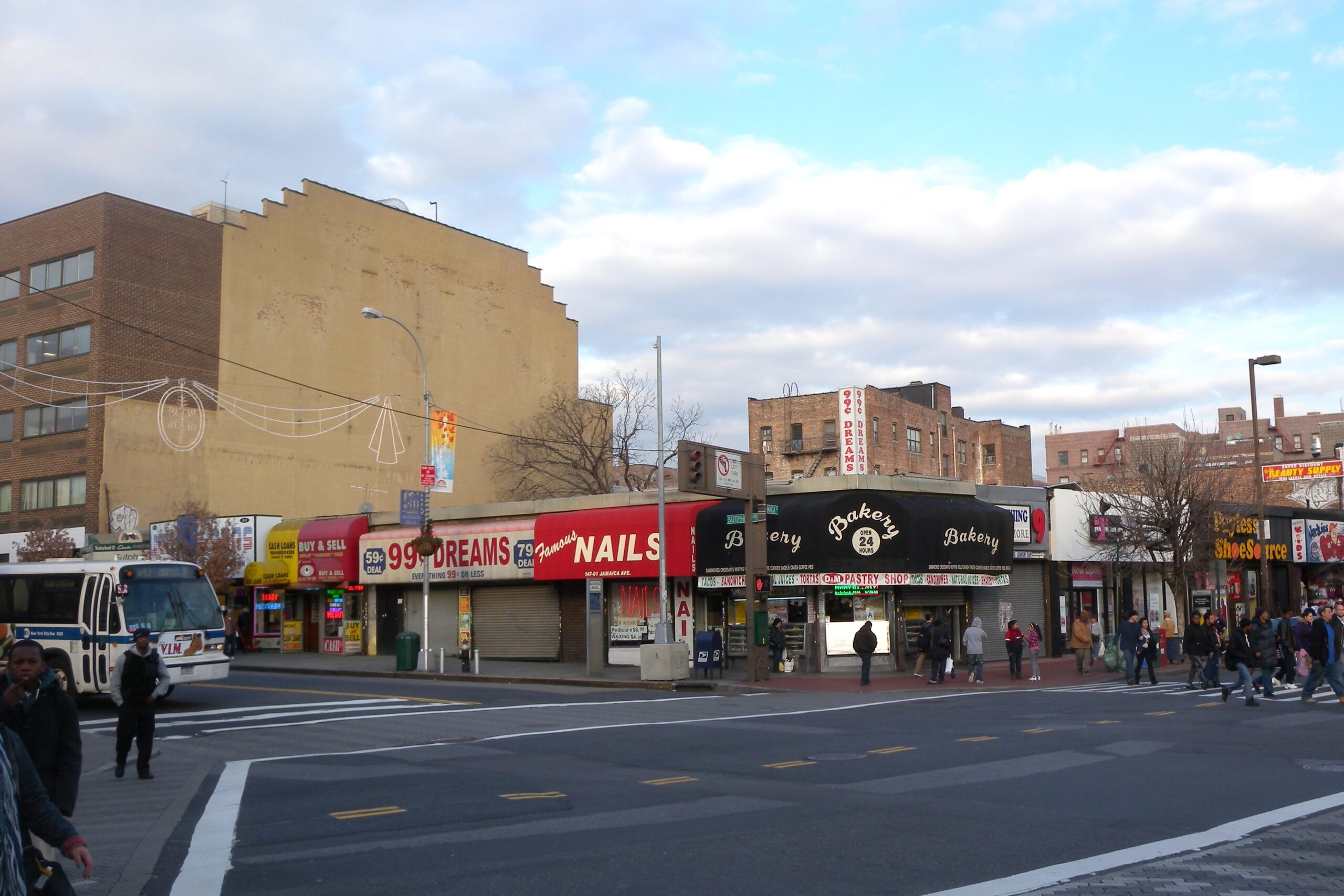 No, no, not the island, mon. You aren’t reading this article to learn how to become a rastafarian. You want the answer to the question in the headline – Is Jamaica, Queens safe?

This article will give you answers to all the questions you are asking. Questions like: Is Jamaica Queens poor? How dangerous is South Jamaica Queens? Is Jamaica NY A good neighborhood? Is it safe to walk in Queens at night?

Jamaica, Queens is also known as ‘South Side’. The neighborhood went through a rough patch during the crack epidemic, but has bounced back, thanks to a decrease in crime. Read ahead to learn more about Jamaica, Queens and how it compares in safety to some of the other neighborhoods in Queens. For example, Forest Hills or Ozone Park.

But why is it called Jamaica? Is this where Bob Marley is really from? No, although many other celebrities hail from Jamaica, Queens, as you will learn later in this article. Along with a few fun facts! So don’t stop reading now!

But first, an answer to the just posed question:

Why Do They Call It Jamaica Queens?

Nowadays, Jamaica, Queens is a major commercial and industrial area with some residential zones. Fun Fact! At one point, the neighborhood was considered as a candidate for the new home of the Brooklyn Dodgers. But ‘twas not to be. They went out west to the sunny skies of Los Angeles.

New York City is made up of five boroughs, two of which are islands. Can you guess which ones? The five boroughs are Manhattan, Brooklyn, The Bronx, Queens and Staten Island. These boroughs further break down into smaller neighborhoods, one of which is Jamaica, Queens.

The borders of Jamaica, Queens are Hollis on the east side. To the southeast side, Rochdale Village, St Albans and Springfield Gardens. On the west side, Richmond Hill and South Ozone Park. South Jamaica. Jamaica Estates, Jamaica Hills and Kew Gardens Hills to the south and Briarwood to the northwest.

There are slightly more females than males living in Jamaica, Queens and two-thirds of residents fall in the eighteen to sixty four demographic. Half the residents possess just a high school degree or less, while another quarter hold some college or associate’s degree.

Most people rent their dwellings in Jamaica, Queens. Almost two-thirds of the population! The median home value is just under half a million, almost more than twice the national average. The average median rent is around two thousand two hundred dollars. If you desire more specific information, fret not. Just type apartment data site, Jamaica, Queens into your search engine.

The cost of rent varies according to location, size and quality. You can find a smaller apartment for as low as sixteen hundred dollars and the cost depending on the factors can go as high as three thousand, three hundred dollars.

On the flip side, two thirds of residents say there are a number of unsightly abandoned or vacant buildings dotting the streets. Only a quarter of residents say that the interior quality of homes are good or excellent. Only a handful more – twenty eight percent – say that the exterior quality of homes can be rated as good or excellent.

Overall, Jamaica, Queens can be cheaper than other areas within the five boroughs. The living cost is – can you believe it? – reasonable. Plus, the character and diversity bubbling around the neighborhood only adds more value, one that cannot be measured in dollars.

The character and diversity of Jamaica Queens may not be quantifiable in paper or electronic currency, but it can be measured in celebrity. Many of these celebrities have turned the inspiration they took from growing up or living in Jamaica Queens into hard, spendable currency.

50 Cent, for example, made a lot more than two quarters in his career. Super Freaky Girl Nicki Minaj also hails from Jamaica, Queens. Born in Trinidad, she moved to the non-caribbean Jamaica when she was five. And not just Salt but also Pepa of the ‘Push It’ duo Salt-N-Pepa are from Jamaica, Queens.

Russell Simmons, hip-hop impresario and creator of ‘Def Comedy Jam’, came up in Jamaica. Makes sense, since his flagship discovery Run-DMC walked his way from nearby Hollis, Queens. Speaking of comedy, Fun Fact! The mother of legendary, ground breaking comedian Lenny Bruce is from Jamaica, Queens.

Not just rappers. Rockers, too. Metallica lived briefly in Jamaica, Queens while recording their seminal early album ‘Kill ‘Em All’’. And governors. Quite possibly the second most iconic New York governor behind Nelson D. Rockefeller, Mario Cuomo, is from Jamaica, Queens.

Speaking of politicians, guess who else? Wait for it, wait for it…Donald Trump! ‘Nuff said.

Good company. Maybe you might run into one of them, who knows?

There are subway and bus lines which will connect you to Jamaica, Queens. Fortunately, they are generally well populated with police officers. But the best way to get to Manhattan from Jamaica, Queens is the LIRR.

What is the LIRR? Any New Yorker will know it well. It stands for Long Island Rail Road. Long Island is the unofficial sixth borough. The LIRR serves commuters from Manhattan to Suffolk County. It is the busiest commuter railway in North America, transiting over three hundred fifty thousand passengers on any given weekday. It is also one of the few transportation systems in the world which you can ‘round the clock.

Not only will it get you to Penn Station in midtown Manhattan and downtown Brooklyn, there are two LIRR stations in Long Island City. Most of these hub stations will connect you to any and all of the subway lines serving the five boroughs. In fact, the Jamaica, Queens LIRR stop is one of the major hubs of the entire LIRR rail system.

In Jamaica, Queens, you can also catch the subway or the more direct Airpass train to nearby international flight hub John F. Kennedy Airport, and catch a plane from there to the other Jamaica. Enjoy, mon!

The biggest one is called Baisley Pond Park and covers over one hundred square acres! The centerpiece of the park is the namesake Baisley {ond, which occupies nearly a third of the park. Frogs, turtles and fish all cohabitate in and around the pond.

Flushing Meadows – Corona Park also extends into Jamaica, Queens. Inside this park you can discover Willow Lake, named for the variety of willow flowers populating the lake.

Another thing to do in Jamaica, Queens is to educate yourself. Never hurts, right? Almost always helps.

York College is a division of CUNY, or City University of New York, the NYC network of public universities. The York College campus is located in Jamaica, Queens.

If you would like to fly the plane instead of just board it at JFK, well, you’re in luck – York offers a baccalaureate program in aviation! The music program boasts a fifteen hundred seat auditorium and an emphasis on jazz. Makes sense, since jazz legends such as Charles Mingus and Louie Armstrong and Count Basie all have connections to Jamaica, Queens.

Further encouraging an education is the NYPL, or New York Public Library. The Central branch of the Queens division of the NYPL is located in Jamaica, Queens, along with three additional library locations in Jamaica, Queens. You never have to go far to get book smart.

Other universities include the Queens campus of the private Catholic University, St. John’s and a university for seniors called Queens College, because learning lasts a lifetime.

But Is Jamaica Queens Safe?

None of the above matters if it’s not.

Violent and property crime rates are about on par with the average us city, receiving grades ranging from B minus to C from various sources.These grades reflect a slightly lower crime rate than most cities nationally. However, Jamaica, Queens does have a higher rate of violent crime rates per capita than New York City as a whole.

Chances of being a victim of crime are one in nineteen in certain parts. However, in other parts, chances decrease to one in seventy five. A crime occurs every one hour and thirty minutes in Jamaica, Queens.

Fortunately, recent polls suggest police presence is sufficient. Over half of respondents reported that they feel pretty safe and crime does not impact them much. Over half also responded that police are very visible and very responsive.

One third responded that sometimes police respond slowly in time of need, but only a quarter of respondents reported times where they did not feel safe and crime was noticeable.

Jamaica, Queens is patrolled by two precincts: the 103rd and the 113th precinct. The precincts have reported that crime has decreased over eighty percent since the nineteen nineties.

Jamaica, Queens has certainly come a long way from that rough patch where it was known to some by the charming nickname ‘south sui – side’.

Is Jamaica Queens a Good place to live?

Here’s what residents of Jamaica, Queens have to say about the neighborhood.

First, they want to warn you about the parking! It’s bad, the street parking. Less than twenty percent of residents say that parking is readily available. So keep that in mind. Residents say Jamaica, Queens is safe as long as you are street smart and vigilant.

Besides that, residents have a lot to say. They report that the neighborhood is very pet and family friendly. You can bring your kids and your kitties! Over half the residents say that there is a good sense of community in Jamaica, Queens.

Residents say Jamaica, Queens is a great place to meet new neighbors. They report that there are a lot of employment opportunities in the area. They also enjoy all the shopping options and the restaurants, which encompass a diverse selection of ethnic foods from all over the world..

Residents also offer helpful tips for the newbies in the neighborhood. They are: be friendly, get to know your neighbors and get involved in the community. Some residents liken Jamaica, Queens to a small town – everyone knows everybody.

That’s it, mon! Maybe now all your questions about Jamaica, Queens have been answered!